U.S. Declines to Join Accord on Secret Detentions 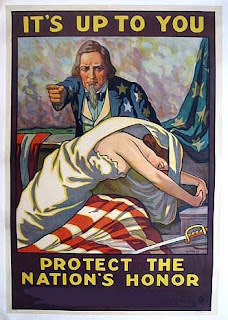 OUTRAGE OVERLOAD - It's hard to know where to begin. At the same time, how can one begin knowing that there is no end to the list of crimes being committed by your government with your tax dollars. Come to think of it, because of the huge deficit, your children's and grandchildren's taxes will still be paying for GOP policies under the Bush/Cheney regime.

Let's start with this Washington Post article. The US, along with Britain, Germany, Spain and Italy, refused to endorse an agreement obviously aimed at the American government's practice known euphemistically as rendition. I insist on calling it kidnapping. Whatever you call it, the Bush administration still wants to preserve their 'right' to do wrong, in the face of international law and common decency.

"PARIS, Feb. 6 -- Representatives from 57 countries on Tuesday signed a long-negotiated treaty prohibiting governments from holding people in secret detention. The United States declined to endorse the document, saying its text did not meet U.S. expectations.

Louise Arbour, the U.N. high commissioner for human rights, said the treaty was 'a message to all modern-day authorities committed to the fight against terrorism' that some practices are 'not acceptable.' ...The Associated Press reported that [ State Department spokesman Sean ] McCormack declined to comment on whether the U.S. stance was influenced by the Bush administration's policy of sending terrorism suspects to CIA-run prisons overseas, which President Bush acknowledged in September."

Meanwhile as the number of US soldiers killed in Iraq passes 3,100, Paul Bremer is coming under intense pressure from Henry Waxman in Congressional hearings for his lack of control over billions of dollars sent to Iraq to 'kick start' the economy. Truckloads of hundred dollar bills have gone missing. Charges have been laid against five individuals for illegally diverting over 8 million dollars in funds allocated to rebuilding Iraq. Among those five, three high-ranking US military officers. Still, this accounts for the merest drop in the 12 BILLION dollars that has gone missing due to the absence of any accounting techniques to keep track of it. It's looking more and more as if the real reason for invading Iraq was to make some GOP supporters filthy rich. It's getting me pissed off. Really steaming.

So, now that it is painfully obvious that the Bush administration is little more than a very sophisticated criminal enterprise, what is being done? Due to Republican resistance, the Democrats can't even debate the war in the Senate. Seems their slim majority has been taken away from them by Tim Johnson's illness and Joe Lieberman's...well, Joe LIEberman. Period. The disdain the GOP show for even the appearance of democratic process is staggering.

It would seem that the rule of law has simply ceased to exist in the United States of America. An Italian judge has ordered a US soldier to face trial over the 2005 death of Nicola Calipari, an Italian intelligence agent in a car at a checkpoint in Baghdad - but it seems unlikely that US authorities will co-operate. "He will probably be tried in absentia as he has been cleared in the US." (BBC news)

The administration supports the troops when they are killing foreigners for no good reason, or participating in an illegal war, but what about those like Lt. Ehren Watada, who refuse to follow orders that they feel are illegal? Watada's Court Martial started Monday with the presiding Judge, John Head (whose first and last names, BTW happen to be synonyms for 'toilet') ruling that Watada could not examine the Iraq war's legality in his defense.

"[Watada's defense attorney Eric] Seitz has unsuccessfully sought an opportunity to argue the legality of the war, saying it violated Army regulations that specify wars are to be waged in accordance with the United Nations charter.

Their final attempt was quashed following a hearing last month in which military judge Lt. Col. John Head ruled Watada cannot base his defense on the war's legality. He also refused claims that Watada's statements were protected by the First Amendment, saying that would be up to a military panel."

So, long story short - secure in their control of the White House, Senate,

and Supreme Court, the Republican party continues to move towards a legal system where guilt or innocence is determined by how meticulously one agrees with the Codpiece in Thief. In doing so, they are also making America into an international pariah. It makes me so mad.