Five-year Anniversary of First Arrivals At Gitmo
From CBC.ca: 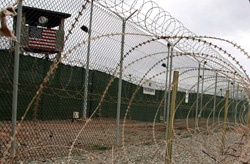 "Demonstrations were held around the world on Thursday to press the Bush administration to close the prison at the U.S. naval base in Guantanamo Bay, Cuba. Protesters gathered in cities such as London, Rome, Tokyo and New York..
..In Washington, D.C., about 100 protesters were arrested inside a federal courthouse, though they had a permit to gather at the building and a judge had allowed them to demonstrate inside the facility..

..Five years ago, the first prisoners from the U.S. war on terror were flown from Afghanistan to the naval base in Guantanamo Bay. Close to 400 prisoners suspected of having links to the militant group al-Qaeda and the Taliban are still being held at the base..

..Guantanamo Bay has become a lightning rod for criticism, with human rights activists saying the prisoners are being held without charge or hope of obtaining a fair trial. Activists have also complained about the treatment of prisoners, alleging that some detainees have been tortured to extract confessions..
..The U.S. military has said it plans to charge 60 to 80 of the prisoners at Guantanamo Bay, and military trials could start next summer. But many of the detainees may never be tried by a military court, and under the U.S. Military Commissions Act, which President Bush signed last October, they could be deprived of the right to contest their imprisonment in a civilian court."

Radio Netherlands Worldwide is carrying this story. So is the BBC. Here's The Guardian's take. The Boston Globe weighs in.

NPR has 'a history of the US military base, and detention of "enemy combatants", plus an analysis of the Bush administration's detainee policies.

Amnesty International describes it as 'a human rights scandal.'

Everybody apparently agrees that it must be stopped. Everybody, that is, outside of the Bush administration and their diminishing number of increasingly ill-informed followers. After five long years, how much longer will it continue?