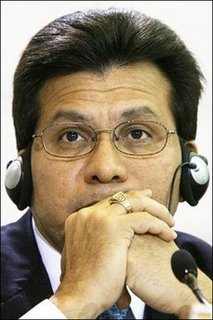 The first of what we hope to be many Senate hearings into administration malfeasance has had new Justice committee chairman Patrick Leahy questioning Attorney General Alberto Gonzales on the matter of the NSA wiretapping program. The program was declared to be unconstitutional and even criminal by Federal Court Judge Anna Diggs Taylor way back in August. There are a couple of articles at Glenn Greenwald's site here and here for those who wish to be brought up to date on the issue.

In a letter to Leahy and ranking minority [insert taunt here] committee member Arlen "The Enabler" Specter, Gonzales claims that the program will now operate under the authority of the Foreign Intelligence Surveillance Court (FISC.) This of course was always legally required, both constitutionally in accordance with the fourth amendment and statutorily to comply with the FISA law set up after the wiretapping abuses of the Nixon administration. Greenwald, who is the acknowledged expert on this matter, was not impressed by Gonzales' reluctant and belated performance of his clear duty as Attorney General.

Let me rephrase that. The administration is pretending that it will now comply with FISA and the constitution because something has changed. Which frankly is a load of crap. The only thing that has changed is the political landscape, where the word oversight now actually means oversight, not overlook. There is not now, nor has there ever been, a legal ruling that allows wiretapping without a warrant being issued.

"The right of the people to be secure in their persons, houses, papers, and effects, against unreasonable searches and seizures, shall not be violated, and no warrants shall issue, but upon probable cause, supported by oath or affirmation, and particularly describing the place to be searched, and the persons or things to be seized."
-- Amendment IV, The Constitution of The United States of America

I can hardly wait until Leahy questions Gonzales on what I think are much more pressing issues in Justice's bailiwick: Suspension of habeas corpus under the Military Commissions Act; Incarceration and imprisonment without charges at Guantanamo Bay; Torture; Signing Statements; The theory of unitary executive presidential powers, to name a few. Gonzales needs to be reminded that he swore an oath to uphold the law, not to support his long-time friend George Bush in his newly carved-out dictatorship.

There are few people in the Bush administration who are worse than the Chimperor himself. For his complicity in the kidnapping, torture and deaths of innocent detainees, Gonzales makes it onto that short list.
UPDATE (3 pm., 01/18): Here's a snippet from the New York Times article on this.

"Attorney General Alberto R. Gonzales is expected to face hostile questioning on Thursday from the Senate Judiciary Committee on the program. And an appellate court in Cincinnati is scheduled to hear arguments in two weeks on the government’s appeal of an earlier ruling declaring the program illegal and unconstitutional.

Some legal analysts said the administration’s pre-emptive move could effectively make the court review moot, but Democrats and civil rights advocates said they would press for the courts and Congress to continue their scrutiny of the program of wiretapping without warrants, which began shortly after the terrorist attacks of Sept. 11, 2001."

How could this make the standing decision moot? The judge in this case had already determined that there was a prima facie case to pursue CRIMINAL charges against the administration, whatever NSA and CIA operatives that were involved, and even non-governmental agencies like AT&T that may have co-operated. This is like a thief who was already facing charges of holding up several liquor stores being let go because he has promised not to do it anymore. Every criminal in America should be asking their lawyer to pursue that option now that the precedent has been set.