...Progressives Had More Power
This is in response to a comment Jump to the Left made on the thread below,

"Progressives are going to need A LOT of power to undo the giant mess created by unfettered GOP governing. We will need both chambers plus the white house, and some court improvement, also.

People need to realize we won't be able to fix all the give away programs for the wealthy and the corporate without some REAL power." 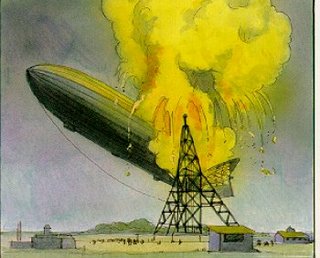 I'm afraid that progressives are going to need more than just A LOT of power to undo the mess. If you could magically replace the Republicans in Washington (including the DINOs) with the most progressive hand-picked elements, including the White House, Senate, Congress and the Supreme Court TODAY, it would be like handing over control of the Titanic after it had struck the iceberg the Hindenburg after it had burst into flames.
(h/t Stephen Colbert for the juxtaposition of metaphor)

Problems the new Gore/Feingold administration would still have to face:

-Crippling deficit, public debt, balance of payments, interest on loans from Japan, China, the UK and others.

-Erosion of confidence in US currency, aka The End of Dollar Hegemony

-Outsourcing of jobs by multinational corporations who inexplicably have received all the benefits of the American economy they show no responsibility or loyalty to.

To name a few. Notice how all these problems are inextricably linked to one another. For instance, a change in government policy could precipitate a 'capital strike' by the multinationals, who could en masse invest their assets elsewhere...(facilitated by globalisation)....which would increase the outsourcing problem exponentially, driving wages down and unemployment up...which would further erode confidence in the dollar...which would make it nearly impossible to service the national debt...which would force foreign suppliers of oil and gas to look elsewhere for customers. Meanwhile the military is still bogged down in Afghanistan and Iraq, having accomplished nothing whatsoever in either theater despite the enormous expense and tragic loss of life.

Did I mention the mainstream media needs to be schooled in journalistic integrity, or that the voting system, education system and health care system all need to be fixed, NOW? Those things aren't going to be cheap or easy. Did I mention that the 32% 'backwash' element of the American public, especially the Religious Right, will be fighting this tooth and nail all the way? Did I mention that the threat from extremist elements around the world has gotten worse, not better, since 9/11?

I know that some or even most of you may consider this assessment to be far too pessimistic. If so, I invite beg you to show me where I've gone wrong. PLEASE!!! As I alluded to above, much of the problem extends beyond the borders of the U.S.A. The concentration of wealth and power into the hands of a tiny minority is a global issue that will not be solved even in part by a second American Revolution or even a second American Civil War. The ultra-wealthy can move their assets around faster than court orders can be signed ordering them seized.

Ironically this post was inspired by consideration of a 'best case scenario' where progressives suddenly were given A LOT of power in US politics. It didn't turn out nearly as well as one might hope.