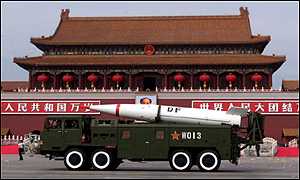 China killed one of its own satellites with a missile a couple of weeks ago, and now they won't talk about it.

This is a truly horrifying event that diplomacy could have solved long ago. China is out of its mind to escalate the situation, and who knows exactly what damage the debris from the satellite will cause.

While this action is way over the top, the Bush administration has been playing fast and loose with space war for a long time and push back is not surprising.

So, in light of yet another looming international crisis, let's take a look a the People's Republic in this installment of...

Email ThisBlogThis!Share to TwitterShare to FacebookShare to Pinterest
Labels: International