We Must Have Hit The Big Time
Click to see image original size. 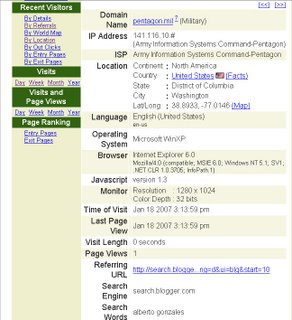 Look what I found! I make regular visits to sitemeter to check out how the blog is doing, where the visitors are coming from (both geographically and by referral.) One of the first times I did this I found a visitor from the US Senate Sergeant at Arms office, which I thought was interesting. If I'm not mistaken, they're the ones responsible for security on the hill, just as the Secret Service is responsible for White House security. Anyway, since then I often check out any hits we get that originate in Washington D.C.

Say hello to visitor #12,895. Presumably someone in the Army Information Command, Pentagon is searching to see who has been blogging about Alberto Gonzales today. I have to assume due to the office of origin within the Pentagon that this was official business, not just somebody using the Pentagon's computers to do a little surfing during off time.

Just so you know 12, I'm not a terrorist. (Can I call you 12? Mister 895 seems so formal.) Dude, I've never even fired a gun in my life, and I think the smell of AmFo would probably make me puke. Believe me, there are bigger fish to fry than me. That dude in the suit who just jaywalked across K street to get to his power lunch is a bigger threat to democracy. So's that other dude who just parked in a handicap space right there in the Pentagon parking lot. He's not handicapped, unless you count being a Republican.

Another thing dude. (unless you're a babe, not a dude, in which case forgive my sexist presumption. And, while you're at it, forgive my sexist referral to you as 'babe.') Lest you've forgotten, you made a solemn oath to uphold THE CONSTITUTION OF THE UNITED STATES OF AMERICA, not to follow the lame-brained orders of a monkey in a codpiece that likes to have pictures taken of himself in a flight suit. He would love to think of himself as military, but he avoided service to the extent of his ability to do so, which owing to his family was considerable. You must have incredibly low self esteem to be following orders that originated with that putz.

So have a nice day. Maybe if you do really well at your current post they'll promote you into a more important task, like say counting paperclips. Or busting that guy for taking a handicapped parking space. That'd be good.

Email ThisBlogThis!Share to TwitterShare to FacebookShare to Pinterest
Labels: Paranoia