"When fascism comes to America, it will be
wrapped in the flag and carrying the cross."
-- Sinclair Lewis -- 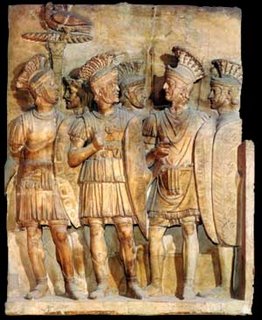 This recent Chris Hedges article in Truthdig brings back a disturbing subject Les Enragés have addressed since our very beginnings, here, here and here. And more recently here, here, and here. But most especially for today's purposes here, and here. That subject is the deliberate attack by BushCo™ and the mind-controlled minions of the Religious Right on the separation between church and state. If there is anything that ticks off the unruly mob, it's the way these guys treat the Constitution as just a 'damned piece of paper,' and this is a big part of that.

"The drive by the Christian right to take control of military chaplaincies, which now sees radical Christians holding roughly 50 percent of chaplaincy appointments in the armed services and service academies, is part of a much larger effort to politicize the military and law enforcement. This effort signals the final and perhaps most deadly stage in the long campaign by the radical Christian right to dismantle America’s open society and build a theocratic state. A successful politicization of the military would signal the end of our democracy." (emphasis added)

"They painted the war in Iraq not as an occupation but as an apocalyptic battle by Christians against Islam, a religion they regularly branded as 'satanic.' All this befits a movement whose final aesthetic is violence. It also befits a movement that, in the end, would need the military and police forces to seize power in American society.

One of the arguments used to assuage our fears that the mass movement being built by the Christian right is fascist at its core is that it has not yet created a Praetorian Guard, referring to the paramilitary force that defied legal constraints, made violence part of the political discourse and eventually plunged ancient Rome into tyranny and despotism. A paramilitary force that operates outside the law, one that sows fear among potential opponents and is capable of physically silencing those branded by their leaders as traitors, is a vital instrument in the hands of despotic movements."

Any argument that no Praetorian Guard is in existence falls on deaf ears in this camp. 'A paramilitary force that operates outside the law' clearly exists. They have been kidnapping, torturing, wiretapping, murdering at will for some time now. Any evidence that has been leaked to the public results not in the crimes being investigated, but the leaks being investigated. Hedges goes on to detail the activity of just one phalanx of the guard, the privatized security mercenary forces in Iraq.

"These mercenary units in Iraq, including Blackwater, contain some 20,000 fighters. They unleash indiscriminate and wanton violence against unarmed Iraqis, have no accountability and are beyond the reach of legitimate authority...It was a stark reminder that the tyranny we impose on others we will one day impose on ourselves."

Truthdig has even more disturbing details which I would be pushing the boundaries of fair use to quote further. There would be no harm in leaving you with this quote;

"For in a Republic, who is 'the country'?
Is it the Government which is for the moment in the saddle?
Why, the Government is merely a servant, merely a temporary servant;
it cannot be its prerogative to determine what is right and what is wrong,
and decide who is a patriot and who isn't.
Its function is to obey orders,
not originate them." -- Mark Twain