Nate at Get In Their Face has just posted the full 90-minute version of Bill Moyer's 1987 documentary The Secret Government - primarily an examination of the Iran/Contra scandal, its investigation, and the aftermath. Even though this was 20 years ago it is still relevant, because the secret government is still in operation. The only thing is, what was being done covertly then is now being done openly, even blatantly. And they've dropped the 'secret' from the name. It's just called The Government now.

The Enterprise, as its operatives referred to it among themselves, was designed from the start to be a stand-alone, self-financing entity free from all government scrutiny and outside the bounds of both domestic and international laws. It was in fact created for the express purpose of breaking the law, and should have been prosecuted vigorously under the RICO ( Racketeer Influenced and Corrupt Organizations ) statute. Because it illegally diverted US military resources and weaponry outside of the legitimate command structure, many of its members could also have been tried for treason. Instead, even after the worst details of this operation were discovered, leading to the Iran/Contra investigation, many aspects of the scandal were protected by Reagan administration claims of 'National Security.' 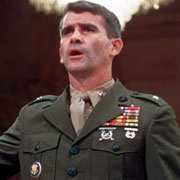 Ollie North (pictured right) should have received a cigarette and a blindfold for his part in this mess. Instead he went on to a lucrative career as a speaker at conservative functions and is now a political commentator lying propagandist for FOX "news."

Ollie's boss back then was Reagan's National Security Adviser: Vice Admiral John Poindexter got off scot-free for his central role in the affair and went on to develop the "Total Information Awareness" technology that is at the heart of the NSA wiretapping program.

Anyone who watched the Iran/Contra hearings will tell you I would be remiss in excluding the key role played by Utah Senator Orrin Hatch. He missed no opportunity to block the thrust of the investigation and provide a platform from which the conspirators could exalt their crimes as heroic and patriotic.

As the result of the incomplete investigation, we have no assurance that anything more than the tip of the Secret Government's iceberg of activities ever came to light. Barely enough to cool the drinks at a Republican country club function. One would be naive to think that this 'stand-alone, self-financing' organization would just go away. None of its members ever showed anything but pride in their activities, which by the way were very lucrative. There was considerable financial motive for the gang to keep on doing what they had already been caught red-handed at and, having escaped unpunished, there was little incentive for them to stop. As a result this video looks like history, but feels eerily like current events.

Watch the video. Tell me what you think. See you in comments.

Email ThisBlogThis!Share to TwitterShare to FacebookShare to Pinterest
Labels: Paranoia