What Country is This? 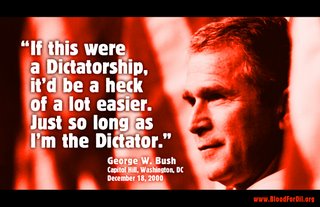 By now we've all heard about the signing statement Dictator Bush has made giving him the right to read our mail. A few years ago, I had the privilege of visiting Cuba for two weeks as part of a religious delegation. Generally we travelled as a group, but midway we broke up and stayed for two days in private homes. My hostess was quite vocal in her opposition to Castro. To prove to me how they have no privacy, she produced a package she had received from friends overseas. Not only had the package obviously been opened prior to her receiving it, it had been resealed with official government tape. For my hostess, it was an outrage that the government didn't even try to hide that they were opening personal mail.

I'm outraged that Bushco won't be using tape with the presidential seal emblazoned on it to reseal our mail. If only he would, it would be the first honest thing he's done in six years.