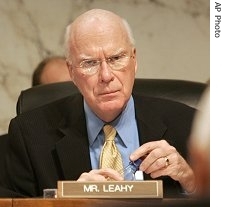 Patrick Leahy has been a thorn in the Side of Attorney General Alberto 'Abu' Gonzales since his confirmation hearings last year. This Jan. 6/06 article in Slate shows Leahy's frustration with Gonzales over the latter's refusal to give straight answers to Leahy's direct questions about his position on the President's power to authorize torture of detainees.

"Early in the day, Gonzales professed the requisite faith that America was "a nation of laws and not of men," but his opinion of the president's ability—however limited—to authorize individuals to engage in criminal acts suggests the opposite. This is a government of good men, Gonzales implicitly assured the senators, so there's no need to worry about legal hypotheticals like whether torture is always verboten. Don't worry, because we don't do it. It's a strange argument from a conservative: We're the government. Trust us."

This Feb. 6/06 article from the Washington Post shows that Gonzo's position on Presidential authority was still unclear a month later, and just days after his February 3 confirmation. Now the subject is not torture, but the authority to spy on American citizens without a warrant. Note that the WaPo article includes hearing transcripts highlighting Arlen 'magic bullet' Specter's blocking a Leahy motion to swear Gonzo in, and Gonzo's declaration that his testimony would be the same whether he was under oath or not.

Fast forward another month. Gonzo has written a letter to the Senate 'clarifying' his Feb. 6 testimony, which letter prompts this response from Leahy; "More than three weeks after the hearing you send the Committee a six-page letter seeking to alter your live testimony. Your letter, in fact, does little to clarify your testimony. Instead, it raises many questions, both factual and also some going to the credibility of your testimony.. ..you admit that 'the Department’s legal analysis has evolved over time.'..You will still need to correct or better explain your statements on pages 184 and 187 of the transcript, which you recognize 'may give [a] misimpression.' "

So what Gonzo was really saying on Feb. 6 was that his testimony would be false whether given under oath or not. And as all this history demonstrates, the Attorney General has a well established pattern of mendacity in the service of undermining the Constitution he has sworn to uphold.

Enough on Gonzales history with Leahy. Current events focus on Leahy's grilling of Gonzales over the handling of the Maher Arar case. (thanks, Ice Station Tango.) But here's a new wrinkle. To answer Leahy's question of why Arar, who has been vindicated by a Canadian Commission of Inquiry (that spent millions of dollars and heard hundreds of hours of testimony, BTW) remains on a watchlist, Gonzales promised that the information justifying this would be provided to Leahy within a week. The briefing is supposedly already being prepared.
Here is that exchange
The thing is, the Canadian government already know what is going to be in that briefing, as this Globe and Mail article shows,

"Public Safety Minister Stockwell Day said yesterday there was 'nothing new' in the American dossier on Maher Arar that would justify keeping him on a terrorist watch list, although a top U.S. administration official indicated an explanation may be forthcoming. 'He should not be on the watch list,' Mr. Day said after pressing the issue with U.S. Homeland Security Secretary Michael Chertoff. 'We have seen some recent information that has not altered our opinion at all.'

Mr. Chertoff refused to comment on why Mr. Arar, a Syrian-born Canadian citizen, still cannot enter the United States or fly over its territory. Barely a kilometre away in Washington, Democrat Senator Patrick Leahy, chairman of the Senate Judiciary Committee, was also demanding an explanation from U.S. Attorney-General Alberto Gonzalez."

And being lied to. Again. Gonzales should be tried for perjury, and immediately relieved of his job. And based on his fuzzy interpretation of law, he should also be disbarred. Then he and the rest of the Bush Criminal Conspiracy should face war crimes tribunals.