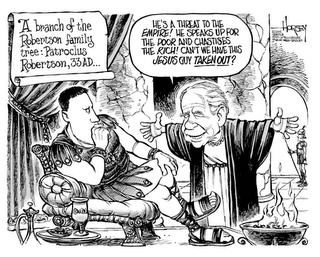 Hugo Chavez is engaged in a very deadly conflict with the United States. At risk; one of the largest oil supplies in the world, possibly even the largest.

Since his re-election, Chavez has instituted a broad nationalization agenda that has the White House mad enough to just kill him.

Sherwood Ross, in a recent article called, "Can Chavez Beat the Devil?" he writes:

White House press secretary Tony Snow claimed nationalization "has a long and inglorious history of failure around the world," a declaration that overlooks the success right here at home of Halliburton Corp., whose sales and profits have soared dramatically since it became a Frankenstein creature of the military-industrial complex and no longer has to bother with competitive bidding to secure multi-billion dollar contracts for disemboweling Iraq. Most of the other principal corporate piggies at the Pentagon trough are also gorging themselves on non-bid delicacies subsidized by the very taxpayers who voted to elect Free Market Bush.

In point of fact, though, nationalization of basic industries has worked in a number of countries, including Chile, Brazil and Colombia, where state-run oil is the norm, AP says. "A 2004 World Bank study that looked at 181 state-run utilities in 15 Latin American and Caribbean countries that were privatized in the 1990s--- in fixed telecommunications, electricity and water distribution and sewers --- found that on the whole, labor productivity, efficiency and quality of service improved, especially in telecoms" although water and sewers "tended to be problematic." By contraxt, when Argentina's Carlos Menem, a bullish privatizer, sold off scores of firms during his 1989-99 presidency, "the selloffs helped modernize the country, yet critics complained the fortunes reaped were later squandered or illegally pocketed and that many buyers failed to make needed investments. Similar complains tagged sweeping privatizations in Peru and Boliva.

"Given the fact President Bush is as busy in Iraq as a wretch up to his neck in quicksand grasping to crawl out, Chavez can probably nationalize CANTV and the other entities he has in mind without having the CIA come after him the way it pounced on Che Guevera when he tried to foment a revolution in Bolivia. Chavez does not use force and violence like Guevera or nationalize without compensation like Castro. It's a fair question to inquire if any leader anywhere in the world is safe from American meddling if he or she adopts a Socialist economic system, or even a mixed economy system that does not totally embrace Free Enterprise Capitalist Economic Principles, also known in some quarters inhabited by the poor and exploited consumers of the earth by the acronym FECES. If Socialism is such an awful idea why not allow the Chavez's of the world make their own mistakes and, as they are discredited, leave it up to their publics to remove them? Indeed, if Tony Snow thinks State-run enterprises are so dreadful, why doesn't he threaten the mayors of American cities who operate thousands of public electric, waterworks, and sewerage utilities?

Chavez has taken a radical step that even a fellow leftist like me finds disturbing. He's nationalized his chief critic, a TV station he accuses of having ties to the CIA. In it's place, Chavez is offering state run programming and he's getting into the act with a five hour, weekly TV show called "Hello President".

Bloomberg looks at how Putin and Chavez have played the open oil markets. By the way something, if you're paying real close attention, you'll notice that oil supply is one of the most commonly lied about subjects reported on by the corporate media.