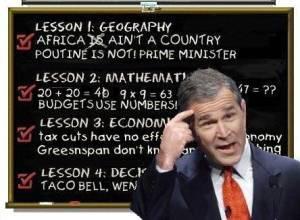 The body of this speech was unremarkable to the point of being totally irrelevant. After being given many chances to pull his reputation out of the shitcan of history, he has learned nothing, and there is nothing new here. Given yet another last chance to vindicate himself, he fails miserably. How many last chances does this guy think he has? After a lifetime of having his ass pulled out of every situation, he apparently believes that number to be unlimited. But he has never exhibited any facility with numbers.

When is he going to learn? - Every time he talks at length about the dire consequences of leaving Iraq to the USA, Egypt, Saudi Arabia, and 'our other friends in the Middle East', it only reminds people that those dire consequences would not pertain had he never invaded Iraq to begin with.

When is he going to learn? - Pulling Joe Lieberman (Independent - NOT!!) off the bottom of the deck does not constitute an ace in the hole any more (although it sounds something like Ace and Hole.) So a phrase like 'key members of the Congress and Senate' that includes LIEberman's name no longer invokes images of bipartisan co-operation in the American mind. The Republicans' withdrawal of support for their own official candidate, and their endorsement of Joe in the last election are still fresh in everyone's mind. Joe's entire career was well and truly exposed then as a false flag operation - now he has progressed from DINO to IINO (Independent in name only.) Any so-called Democrats that continue to support the pResident's agenda in any way only serve to expose themselves as wolves in sheep's clothing. Come the next election - see ya', wouldn't want to be ya'. In fact, Bush should not be bandying the word 'bipartisan' around at all any more. Increasingly it is coming to mean the defection of more and more Republicans to join the opposition to him.

When is he going to learn? - anything.

When is he going to learn? - That nobody believes a word he says any more.