..And The Hall of Fame 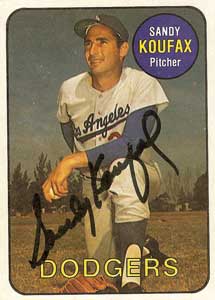 I'm not an awards kind of guy, mostly because I don't like the ceremonies. To describe the Oscars, Emmys, Grammys etc. as 'the entertainment event of the year' is to me sheer hype. These events quite frankly strike me as death by serial windbaggery.

Here's the thing. Blue Gal just put up a post announcing the Koufax Awards nominations being open. The categories are:

Blue Gal discloses her picks in comments. She picked herself in three categories, and I don't see anything wrong with that. If you don't think you at least occasionally offer something that is at least unique and interesting you probably shouldn't be blogging. Why be in it if all you're doing is increasing the noise level others have to shout over? I like her picks of Quaker Dave's new Daily Darfur for best Single Issue Blog and best Human Equality Blog, because I really like QD and I really think the Darfur issue should be getting more attention. But I don't agree with her pick of Dave as the Best Commenter, and here's why;

Before he mysteriously went quiet on July 23, Sans-culotte of Sans-culotte.org (our inspiration, if all the guillotine images didn't clue you in) was BY FAR the best commenter anywhere in Greater Left Blogistan. Hands. Down.

His comments ( usually at AMERICAblog or Crooks and Liars, sometimes at Moxie Grrrl or Get In Their Face ) often surpassed the posts they were in response to; witty, well-researched, informative - he seldom expressed a thought without providing a link to back it up. More than that he was always incredibly respectful of other commenters on a thread, encouraging them to express their opinions, giving technical advice, even on occasion doing research for them. His comments were so good that they made the comments of those around him better. I. Kid. You. Not. His blog was good, very good. But his comments were unsurpassed.

Even his spelling, grammar, and punctuation were impeccable. Considering that he always seemed to have exactly the right information at hand, and that he would follow up one excellent comment (complete with two or three relevant links) with another just as good minutes later - frankly I could never figure out how he did it. I was so impressed that I wrote an analysis of one of his threads as a post on The Guillotine (Les Enragés.org's short-lived predecessor.) I have moved that post into Les Enragés' archives so I could link to it. Why Sans Has So Many Fans

Email ThisBlogThis!Share to TwitterShare to FacebookShare to Pinterest
Labels: Sans-Culotte