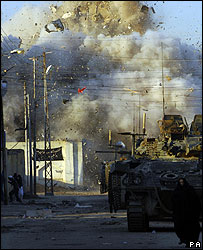 Let's see if I've got this straight. We'll stand down when the Iraqi security forces stand up, right? What I've always wondered is how do the coalition screen those they train and arm to enter into the security forces they hope will stand up at some undefined point in the future. In a country where the vast majority hate the US led occupation of their country, how do you give someone an assault rifle with the assurance it won't eventually find its way into the wrong hands? For that matter that the guy you're training isn't the wrong hands to begin with?

Actions by UK forces in Basra over the weekend really underline the importance of these questions in an undeniable way. Here's the story as reported by CBC news;

"British forces stormed a police station in Basra in southern Iraq on Monday, rescuing prisoners on death row and killing seven Iraqi gunmen during the pre-dawn raid.
More than 1,000 British troops backed by tanks then demolished the building with explosives.
The military called the police headquarters a symbol of oppression for the city's residents and said the unit was suspected of torturing and murdering prisoners.
Many of the 127 people rescued — all of whom were suspected criminals — were crowded together in a small cell, living in "appalling conditions," the military said.
But the Basra council has stopped co-operating with the military in protest of what the council described as an illegal raid...
..The operation came days after Iraqi officers were arrested Friday on suspicions of leading death squads. The unit is also accused of being responsible for murdering both local and international troops."

Once again, let me get this straight - Our guys (the Brits are still on our side, aren't they?) were appalled so much by the Iraqi security forces we trained and armed (the good guys) they've had to arrest some of them, raid a police building, release prisoners (the bad guys - predictably there is evidence of torture) and blow up the police headquarters. Because the 'stand up' guys we're hoping to hand the country over to are suspected of leading death squads. Hoo, boy! I think there is a notable flaw in this plan. And how does this square with this report from the BBC, only five weeks ago?

"The UK has 'confidence' it may be able to hand Basra's security to Iraqi forces 'at some point next spring', the UK's Foreign Secretary has said.
Margaret Beckett told MPs Iraq's fate was 'hanging in the balance' and said it was necessary 'to hold our nerve'.
'The progress of our current operation in Basra gives us confidence we may be able to achieve transition in that province... at some point next spring.' "

Uhhhh...I think you may want to rethink that one guys. If this is the way your brilliant plan is working out (the phrase, 'I doubt six months' bounces around in my head), you may be in it for the long haul hell.

The New York Times has more on this story.