Perhaps some of you are familiar with Jonathan Turley, Law Professor at George Washington University, and a frequent commenter on Keith Olbermann's show. I really like the guy because he has a clear idea of what Constitutional protections of freedom and privacy are supposed to be about. In this piece he demonstrates that he also has a pretty good sense of humor.
Virtual Strip Search

Get a load of this exchange between Keith and Jonathan. 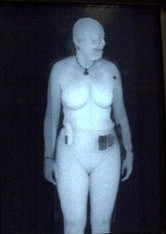 KO: "Having now seen that photo (right), we can't not begin with the X-Ray machine. It would seem Jonathan to be not just intrusive but actually indecent, so much so .. What is the difference between requiring passengers to subject themselves to that and simply asking them to strip off all their clothes before boarding?" 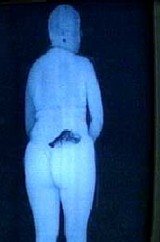 JT: "Well maybe this is a recruiting tool to get TSA applicants, which should now be called T 'n' A or something, I don't know. But most of us are more afraid we'll be sent to something like Jenny Craig than Gitmo after this, because it is a very revealing picture."

Correct me if I'm wrong, but that's two zingers in as many sentences, and both worthy of a Saturday Night Live skit, though admittedly neither would be the funniest line on even a mediocre night. And I don't think it's the best comedic technique to laugh at your own joke, especially before you even tell it as he does here. Nonetheless I give Jonathan two thumbs up for his effort, especially the reference to Jenny Craig. Not ROTFLMAO, but at least LOL. And for the record I don't think Turley's venture into comedy undermines his credibility when he speaks seriously to substantive issues.