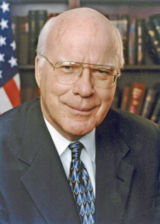 - "Has Actually Read the Constitution."
- Is Working to Restore Habeas Corpus


Here's an interesting tidbit. Due to the Democratic takeover of the Senate, Patrick Leahy (D - VT) will take the chair of the key Senate Judiciary Committee.

"Leahy of late has had a fire in his belly, the likes of which we haven't seen in a while. His sadness at the loss of comity and the discarding of basic Constitutional values under the Bush GOP has turned into outrage, and he has been consistently riveting in front of a crowd in recent months.

At a recent post-election party - "He related a conversation where he was recently asked if President Bush should be worried that he was now to be Chair of the powerful Senate Judiciary Committee. The crowd started cheering.

'No, no' he said, calming the crowd, as if to be prepared for a softening of his rhetoric.

'No, he shouldn't be worried. He should be terrified.' "

Leahy went on to assure the crowd that, unlike "some in the administration," he'd "actually read the Constitution," and went on to promise that no judges nominated to the federal bench who would ignore that Constitution would ever get past his committee. (from the Green Mountain Daily)

That's not all folks. On Tuesday Leahy and outgoing Judiciary Committee Chair Arlen Specter introduced the Habeas Corpus Restoration Act (Statement in Congressional Record). While this falls far short of the more desirable goal of overturning the Military Commissions Act (aka War Criminals' Protection Act, aka Torture Bill) it's a welcome start. So Leahy gets my early nomination for Person of the Moment. Ahh, and sure it's a great day to be Irish!

Glenn Greenwald has a post today which discusses the Restoration Act's chances of overcoming a Repuglycan filibuster (slim) let alone receiving a veto-proof endorsement in the Senate (slim to none.) Glenn is slightly more optimistic to the idea of the provision of suspension being struck down by the Supreme Court on Constitutional grounds. Like anyone who can read can see that it clearly contradicts Article I, section 9.
Even if the Leahy/Specter bill had no chance of becoming law, it's worth doing for political reasons. Every Repug Senator that votes against it is forced to go on the record as OPPOSING AMERICAN VALUES in the most egregious manner. There are a lot of Republicans whose terms are up in '08. And if the bill overcomes a filibuster, Glenn points out, "even forcing a presidential veto by overcoming a filibuster would be worthwhile on many levels. (it would be remarkably illustrative if the only two measures over the course of six years which moved the President to exercise his veto power were a bill to provide for stem cell research and another to protect the 900-year-old writ of habeas corpus)" Shrub the Younger's historical legacy is already bruised and battered. Such an action would turn it into the putrifying corpse that it truly deserves to be.