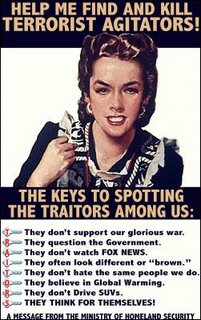 This Glenn Greenwald article has me literally wanting to throw up. I am so upset I can barely type, and tears are in my eyes. In the first case to test the habeas corpus-negating provisions of the onerous Military Commissions Act (AKA Torture Bill, AKA War Criminals' Protection Act), a district court has ruled in favor of the administration's bid to strip defendants of their constitutional and even pre-constitutional rights going back to the 13th. century Magna Carta. Glenn rightly describes the MCA as a 'legislative atrocity', and up until now I held out some hope that judges would have the decency and good sense to slap it down like an annoying insect.

"The decision was a major victory for the Bush administration's attempt to vest the President with the power to imprison individuals -- even for life -- without according them any meaningful opportunity to contest the validity of their imprisonment.

The district court ruled that (1) the MCA successfully stripped federal courts of jurisdiction to hear habeas corpus petitions filed by "war on terrorism" detainees, and (2) under controlling Supreme Court precedent, "enemy aliens" who have no substantial connection to the U.S. (i.e., never resided inside the U.S.) have no constitutional right to seek habeas corpus review. As a result, the court dismissed the case of the Guantanamo detainee seeking habeas review here and, in essence, upheld the Bush administration's power to detain such "enemy combatants" forever while denying the detainees all access to our courts."

Glenn obliquely references the fact that the plaintiff, Salim Ahmed Hamdan (The same individual named in the lawsuit Hamdan v. Rumsfeld that forced the creation of the MCA) was protected not only under US law, but the Geneva Convention as well. This decision would seem to make official the status of the US as an out of control rogue state in the international community.
Meanwhile the majority of Americans remain either unaware or unconcerned that their country has been hijacked by war criminals, and calmly and complacently went about their holiday preparations. -baaaaa- I would think it more appropriate for the entire populace to don black armbands over this, wear sackcloth and ashes, or tear at the hem of their garments in mourning for the last hope that the constitution has not been torn to shreds. But that's just me.
Glenn provides links to the Washington Post's article on the decision, as well as the reaction from the Center for Constitutional Rights. I strongly recommend reading the latter in its entirety.
Cross-posted at Ice Station Tango
TAGS: Habeas Corpus, Hamdan, Human Rights, Justice, Injustice