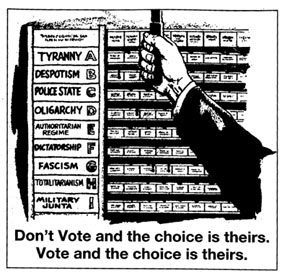 From the AP Wire:

"A federal advisory panel on Monday rejected a recommendation that states use only voting machines that produced results that could be independently verified.

The panel drafting voting guidelines for the U.S. Election Assistance Commission voted 6-6 not to adopt a proposal that would have required electronic machines used by millions of voters to produce a paper record or other independent means of checking election results. Eight votes were needed to pass it.

The failed resolution, proposed by Ronald Rivest, a Massachusetts Institute of Technology computer scientist and panel member, closely mirrored a report released last week warning that paperless electronic voting machines are vulnerable to errors and fraud and cannot be made secure.

Some panel members who voted against the proposal said they support paper records but don't think the risk of widespread voting machine meltdowns is great enough to rush the requirement into place and overwhelm state election boards.

'They should be longer-range goals,' said Britain Williams of the National Association of Election Directors. 'You are talking about basically a reinstallation of the entire voting system hardware.' "


Question: Who decided that these people were competent and well-informed enough to be deciding this crucial issue? Their decision seems, well..INSANE!

Answer: "Congress created the panel after vote-counting problems in the 2000 presidential election to advise the Election Assistance Commission."

Oh, now I get it. This panel was hand-picked by a Republican Congress to come up with a predetermined conclusion. After SIX YEARS of dragging their feet which resulted in MORE dubious election results in 2002, 2004 and now 2006 (especially in FLA 13) these pinheads treat voter fraud like the Repug EPA treats global warming. And what a lame excuse to justify their decision. Reinstallation of the entire voting system hardware requires nothing more than printing paper ballots and providing enough pencils.

The only thing being preserved here is the Repugs chance to steal the election in 2008. This is disgusting.

Also read: What Election Fraud Looks Like -by Michael Richardson in OpEd News