...Don't Make a Right.
..Perpetuating the Victimization of Maher Arar. 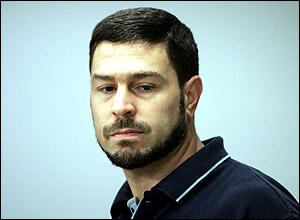 What's got me enraged today? Mostly, this article in the Toronto Star, about US authorities refusing to take Maher Arar off a security watch list even though he has been cleared of any wrongdoing by a Canadian Royal Commission.

"In a written statement yesterday, the U.S. ambassador to Canada David Wilkins said his government deported Arar in 2002 to Syria because of 'information from a variety of sources.'

Wilkins appeared to assert that the United States had its own reasons to act against Arar, and does not intend to comply with a Canadian government request to take Arar off its border watch lists.

...Wilkins' letter was not specific about what sources of information he was referring to — whether they were a "variety" of Canadian sources, or whether the intelligence came from U.S. officials or other foreign agents."The decision to remove Mr. Arar from the United States in 2002 was made by U.S. officials based on our own independent assessment of the threat to the United States," said Wilkins.

That means Arar is effectively barred from travelling to about 70 countries that share information with the U.S., Arar's lawyer, Julian Falconer, said last week."Due to a lawsuit in the United States initiated by Mr. Arar which was dismissed at the trial level and is now on appeal, I cannot go into any further detail," Wilkins said in the release."


Mr. Arar was kidnapped by American law enforcement personnel in September of 2002 on flimsy evidence, to whit; "the RCMP passed on erroneous information to the U.S., among other things, labelling Arar and his wife as 'Islamic extremists' linked to Al Qaeda." I use the term kidnapped because no charges were ever laid, so I won't dignify what happened with the word 'arrest.'

Arar was 'renditioned' to Syria where he spent nearly a year in an underground cell barely bigger than a coffin, and only taken out to be tortured daily. I blogged about this last Sept. 19. (Canadian Terror Suspect Vindicated.)

I deeply regret having referred to Mr. Arar as a 'terror suspect,' a term I parroted from the articles I was quoting. The correct term is 'innocent victim.' I do not regret reminding our readers that Mr. Arar's innocence was proven after an investigation that lasted two years. A line from a commenter on Glenn Greenwald's threads comes back to me, in that instance referring to Jose Padilla, but equally applicable here,

The phrase, "there but for the grace of God" comes to mind.