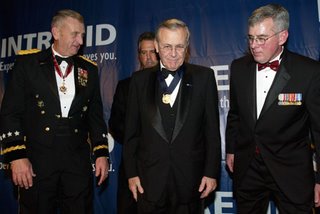 Huh. Sounds like a fact. Something based in... reality. Shocking. Actually I think Rummy wrote something like that in a memo on his way under the bus.

Of course, Bush would never admit that Gates is Poppy's pick.

He also won't admit that Iraq is a civil war.

It's called, as Bob "Weathervane" Woodward so aptly put it, a "state of denial".

Today Bush made a push to liberate the state of denial by making a stunning, fact based admission of his own--"I am," he said, "the commander-in-chief."

That's our problem right there. Bush is going out of his way to make sure the world knows it's his power, not Daddy's. So feet will be dragged. Bush will make every delay possible to keep us in Iraq while more and more of our soldiers die.

And that--among all the other reasons--is why he is the worst son-of-a-bitch ever to sit in the Oval Office.

To which Eric Foner agrees, for fantastic reasons of his own.

VIDEO: Poppy Bush is not down with the blogs. Wonder why.