As the construction begins on Freedom Tower, accusations of a great swindle have come to light. By now, we have become accustomed to great insults to the memory of the people who died on 9/11, because we have seen the Bush administration (not to mention Disney, Ann Coulter, Fox News...) co-opt 9/11 time and again for political gain. Despite the desensitization that has resulted from years of 9/11 abuse, the utter insensitivity of the crime Morgan Stanley has been accused of can not be overlooked. 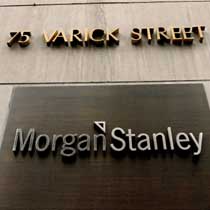 In a disciplinary complaint, the National Association of Securities Dealers (NASD) alleges that Morgan Stanley used a "9/11 smokescreen" to hide e-mails sought by angry claimants in numerous arbitration proceedings from October 2001 through March 2005.

The securities industry's self-regulating arm accuses Morgan Stanley of "falsely claiming that millions of emails it possessed had been lost in the Sept. 11, 2001 terrorist attacks on the World Trade Center in New York, where its email servers were housed."

Suddenly I believe in the death penalty--not for individuals, but for corporations.