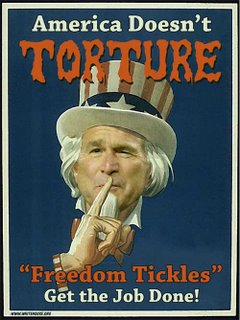 God bless Glenn Greenwald for never letting up on the criminal behavior of the Bush administration and for reminding us that every day they are in power is a day that untold victims languish in torture prisons. And thank you Glenn for today's post refreshing our outrage at the treatment of Jose Padilla, a US citizen who was held in prison for 3½ years without charges, who was finally charged in November of 2005, who still awaits trial on nebulous charges for which there is so little evidence that he will most like be acquitted.

"Last month, I wrote about the torture -- there is no other accurate word for it -- to which Padilla alleges, quite credibly, he was subjected over the 3 1/2 years of his lawless detention. Today, The New York Times describes the apparently jarring video showing a completely dehumanized Padilla being transported from his black hole to a dentist visit.

They only brought charges against Padilla in November, 2005 -- and transferred him from his military brig to a federal prison -- because the Supreme Court was set to rule on the legality of their treatment of Padilla, something they were desperate to avoid.. . .But the administration continues to argue that it has the power to detain U.S. citizens -- including those, like Padilla, detained not on a "battlefield," but on U.S. soil -- indefinitely and without any charges being brought. Nothing has changed in that regard.

..John Aschroft flamboyantly brand him "the Dirty Bomber" and then leak to the press over the next two years that he wanted to blow up apartment buildings. But the indictment contained none of those allegations (because the "evidence" on which they were based was flimsy from the start and, independently, was unusable because it was obtained via torture).. ..forced to defend their accusations in court, the Bush administration's case against Padilla has been revealed to be incredibly weak.

The Bush administration currently has in its custody 14,000 human beings around the world (at least) who have never been charged with any crime (needless to say, we're not entitled to know the number or what is being done with them, because that's Secret, like everything else)."

The statements in this article seem to compete with one another for the most outrageous or enraging title. Perhaps the statement that comes closest to putting a bottom line on the story comes from the comments;