In Part One, we looked at Nancy Pelosi's list of stated objectives for the legislative session beginning in January. Russ Weiss put up his own list at Ice Station Tango, and link to Adam McKay's list at Huffington Post. One could hardly stroll around the suddenly so much sunnier realm of Greater Left Blogistan for the last couple of days without stubbing one's toe on a to-do list for the new era of democracy. Since I am therefore in a bind making my list stand out, I offer this for you to listen to while reading it, as an inducement. By the time you're finished, I will explain to you what makes this list different.
Many Rivers to Cross 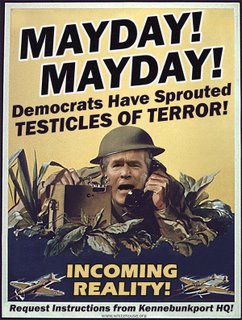 As to the first objective, I agree with Adam McKay. Bring back some form of the fairness doctrine, threaten or even revoke ABC/Disney's broadcast license, put Limbaugh in jail for his OxyContin crimes, do SOMEthing to get America's media back on an even political keel. The reason this is at the top of the list is simple. Some hard decisions have to be made, and some bitter medicine swallowed. The President has veto power. What needs to be done has to have the full support of the American people, impossible if 30% or more of them are being deliberately misinformed on a daily basis by FOX "news" and their ilk.
"If a nation expects to be ignorant and free, in a state of civilization, it expects what never was and never will be." -- Thomas Jefferson
"I am a firm believer in the people. If given the truth, they can be depended upon to meet any national crises. The great point is to bring them the real facts." -- Abraham Lincoln

The second objective, no less vital, is to totally scrap the idea of electronic voting machines. There is no compelling rationale behind their use, and hundreds of well documented problems arguing against them. Paper. Pencil. Ballots to be hand counted, all witnessed by scrutineers from both (or all) parties. Any questions? I didn't think so.

At the top of Russ' list, and high on mine is lobbying and legislative reform. Disconnect both parties from the corrupt campaign financing that sustains the lobbying industry, the practice of earmarking, and the inherent threat to democracy posed by corporate megabucks. The sad but true fact is; if a corporation can spend a million dollars on campaign contributions, lobbying, and outright bribery that results in them saving ten million in taxes and five million in regulatory costs, they're going to do that every time. And America loses, every time.

In fourth spot, roll back the tax cuts for the ultra-wealthy. The Democrats should have been pointing out during this campaign how many of the beneficiaries of these cuts actually live outside the country, and are not citizens. I don't see US citizens supporting a gravy train for Saudi princes, German industrialists, Japanese financiers, or Chinese despots. They are the ones whose investment dollars are going to outsourcing American jobs, and destroying the middle class.

And in fifth spot, increase the minimum wage. I think it is unconscionable that a person working a full 40 hours or more a week should not be able to pay his or her rent and have enough left over to adequately provide for the basic necessities of life; food, clothing, transportation and basic health care.

Obviously this is a very short list, and some of it coincides with Nancy's, Russ's, or Adam McKay's. And there are glaring omissions, most notably repeal of the odious Military Commissions War Criminals' Protection Act. So what makes it different, and what is my rationale for this particular list in this particular order?
This list has a theme that was drawn from the sad but true fact of the Presidential veto. The Democrats cannot override legislation that has already been put in place while they were out of power. Therefore they must use the next two years to consolidate and expand the political capital they have so far amassed. (And unlike the pResident's phantom political capital, achieved only by gerrymandering, voter suppression, fraud and deceit, I think the Dems' capital is the real deal.) The next 24 months, they should hammer on one message, "America, we're on your side." Come to think of it, that wouldn't be a bad slogan in '08.

Democratic legislation should send a clear and unmistakable message to the people. Every opportunity should be made to challenge Bush's policies. When he takes out his veto pen, he should be called a radical obstructionist. Every opportunity must be taken, and more opportunities created to show the people that the Republicans are decidedly NOT on their side when they side with Big Oil, Big Pharma, and Big Greed.

A major battle has been won, but the war is far from over. It has barely begun.