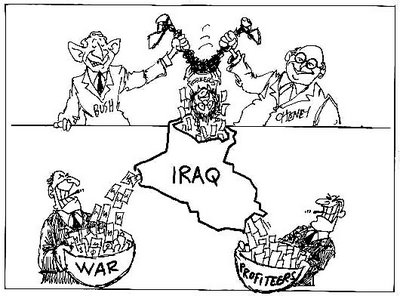 And while it's nice to see that the new Congress plans to investigate torture it's clear that Rummy and Alberto won't be going off to Germany any time soon.

But the war profiteers, are another story. They do not need to go anywhere--our jails right here in America will accommodate them nicely.

They're as real as the Democratic majority in congress.

They're as real as Henry Waxman.

From The Village News:

The Democratic congressman who will investigate the Bush administration's running of the government says there are so many areas of possible wrongdoing, his biggest problem will be deciding which ones to pursue.

There's the response to Hurricane Katrina, government contracting in Iraq and on homeland security, political interference in regulatory decisions by the Environmental Protection Agency and the Food and Drug Administration, and allegations of war profiteering, Rep. Henry Waxman (news, bio, voting record), D-Calif., told the Los Angeles Chamber of Commerce.

"I'm going to have an interesting time because the Government Reform Committee has jurisdiction over everything," Waxman said Friday, three days after his party's capture of Congress put him in line to chair the panel. "The most difficult thing will be to pick and choose."

Waxman, who's in his 16th term representing West Los Angeles, had plenty of experience leading congressional investigations before the Democrats lost control of the House to Republicans in 1994.

That was the year when, as chairman of an Energy and Commerce subcommittee, he presided over dramatic hearings he convened where the heads of leading tobacco companies testified that they didn't believe nicotine was addictive.

The scene made it into the movie "The Insider," but Waxman noted Friday that no subpoenas were issued to produce that testimony.

Republicans have speculated that a Democratic congressional majority will mean a flurry of subpoenas and investigations into everything under the sun as retaliation against the GOP and President Bush.

Not so, Waxman said.

By the way something, all the current and former investigations are listed here. So, a lot of leg work is already done. That is how you run a shadow government, my friends.