Dems Ready to Bring It On

Investigations with subpoena powers - Oh, My!! 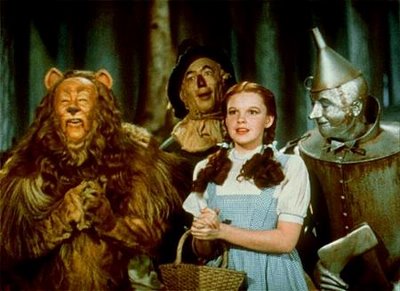 Forget about Lions and Tigers and Bears, for that matter forget about flying monkeys and the Wicked Witch of the West. The thing that Republicans fear most is scrutiny, and it's just around the corner. The newly elected Democratic congressional majority has sent BushCo™ a little message; "Your checks (and balances) are in the mail." Behavior that the Republicans have indulged in with impunity for six long years will finally be brought into the light of day. As reported in the LA Times on Friday,

"With control of every committee in Congress starting in January, the new majority will inherit broad powers to subpoena and investigate. And that is expected to translate into wide-ranging and contentious hearings.

The agenda is likely to be dominated by the Iraq war, but could include probes into the Bush administration's warrantless surveillance, environmental policies and new prescription-drug program for seniors. Industries, such as oil companies, could also come under closer scrutiny.

'The American people sent a clear message that they do not want a rubber-stamp Congress that simply signs off the president's agenda,' said Rep. John Conyers Jr. (D-Mich.), who is in line to become chairman of the House Judiciary Committee."


And there are no shortages of committees whose oversight responsibility could lead to investigations. The richest vein is the Iraq war, and its relationship to the shadowy energy policy meeting conducted by Dick Cheney in the administration's first term. The vast overcharging of government by Halliburton and other Republican-connected corporations that were awarded lucrative no-bid contracts looks and smells fishy even when the details are largely unknown.

"Rep. Ike Skelton knows what he will do in one of his first acts as chairman of the Armed Services Committee in the Democratic-led House: resurrect the subcommittee on oversight and investigations.

The panel was disbanded by the Republicans after they won control of Congress in 1994. Now, Skelton (D-Mo.) intends to use it as a forum to probe Pentagon spending and the Bush administration's conduct of the Iraq war."

When corruption is found, as it surely will be, how are the Republicans going to explain the disbanding of this subcommittee? They will look like the burglar caught in your house who just happened to have some hamburger to bribe the watchdog into silence. So let's imagine three parallel investigations; one into the bogus 'intelligence' that led America to war with Iraq to search for WMDs the administration knew damned well weren't there, another into Cheney's energy policy meetings prior to the war, which included maps of Iraqi oil fields, and a third probing misdirection of funds by Halliburton et. al. Care to predict that these three separate probes won't eventually overlap? Me neither.

One of the criticisms leveled by progressives against House Speaker Elect Nancy Pelosi during the recent election campaign was that she had vowed to keep the idea of impeachment of George W. Bush off the table. Hmmmm.. not so much, if you read this Washington Post article from last May.

"House Minority Leader Nancy Pelosi (Calif.) said in an interview last week that a Democratic House would launch a series of investigations of the Bush administration, beginning with the White House's first-term energy task force and probably including the use of intelligence in the run-up to the invasion of Iraq. Pelosi denied Republican allegations that a Democratic House would move quickly to impeach President Bush. But, she said of the planned investigations, 'You never know where it leads to.' "

Well, we all know where it leads to, don't we? And it isn't down some yellow brick road. When these investigations get well under way, they will stir up a tornado of discontent over the crimes committed by the Bush regime. All their wickedness, 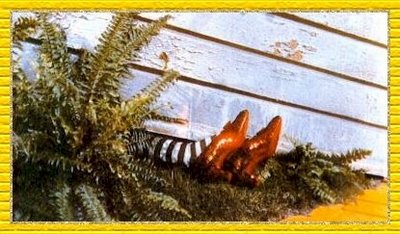 which they have gotten away with under the naive presumption that it was justified by the Great War On Terror, will be seen for what it is. A vast power and money grab, and ultimately a covert war on the democratic values that have sustained America for more than two centuries.

The Republicans are going to feel like a house fell on them. Specifically, the House of Representatives.

UPDATE: The Guardian is reporting that Senator Carl Levin has confirmed that he will be investigating abuses of the US rendition program when he takes over as chairman of the Senate Armed Services Committee. This is good news indeed, that program and its 'enabling' Military Commissions Act being the worst thing to have come out of the administration.

"The extra-judicial programme has seen untried criminal suspects rounded up by CIA operatives in more than a dozen countries and sent to third states for interrogation. Some captives have allegedly been snatched off the streets and suffered torture in detention.

Asked whether he would investigate the renditions programme, including the secret prisons and missing detainees, Mr Levin replied: 'Yes. Yes, yes and yes.' "