We'll Help... On One Condition 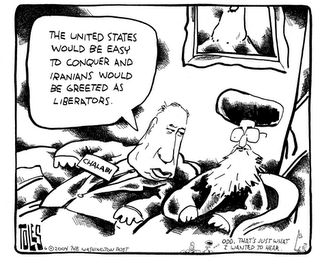 Despite all the proposals of sending more troops to secure Iraq, we don't happen to have an army lying around that we're not using. We can't even win in Afghanistan, much less Iraq, so we need a way out. One possibility--Make Bush's War Amadinejad's War.

Iraqi President Jalal Talabani will visit Tehran on Monday for talks with hardline counterpart Mahmoud Ahmadinejad expected to focus on Iran's possible role in curbing bloodshed in the war-ravaged neighbour.

Talabani had been scheduled to fly to Tehran on Saturday but postponed the visit due to a curfew in Baghdad imposed after a string of car bombs on Thursday killed 202 people and wounded 256.

He is now set to travel to Iraq's eastern neighbour on Monday, his spokesman told AFP.

"I can confirm that the president will travel to Tehran on Monday. His visit is for a couple of days," Hiwa Othman said.

Today Amadinejad had this less than diplomatic message:

The Iranian nation is ready to help you get out of that swamp (in Iraq) on one condition ... you should pledge to correct your attitude. Go back and take your forces to behind your borders and serve your own nations.

Swamp, quagmire, same difference. This subtle detail of translation points to the obvious conclusion... Amadinejad is working with Pelosi--OMG!~

VIDEO: BBC coverage of Iran's offer to help us out.