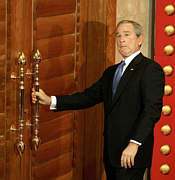 Remember this infamous gaffe of Bush's when he tried to leave a conference during a trip to China and the door he chose was locked? This incident should become a prominent feature of Bush's recurring nightmares for the rest of his lame-duck illegal occupation of the White House. The door he sees closing in front of him now is morphing in front of his eyes into the gray bars of a jail cell.

The loudest bang and click of a latch came of course when on Nov. 7 the Diebold hacking of thousands of precinct results was insufficient to thwart the will of the people. Sufficient however to be obvious by comparison to the exit polls. Dependence on a compliant and complicit legislature is no longer an option. This is made clear in this story from USNews and World Report. His exit strategy for getting out of criminal responsibility in the NSA wiretapping program just slammed in his face. (Emphasis mine)

"His plea for a legislative stamp of approval on the controversial spy effort is an "important priority in the war on terror," Bush said. The response: deafening silence. Senate Majority Leader Bill Frist quickly dispatched aides to put out the word on Bush's request: Not gonna happen.
...And with Democrats promising oversight hearings next year on how the program was hatched and whom it targets, it appears likely that the issue will be decided in court and, ultimately, the Supreme Court."

With subpoena powers in the hands of a Democratic Congress, judges like Anna Diggs Taylor may suddenly find themselves in possession of seriously damning evidence against the administration. The stone wall is crumbling. NSA paper shredders must be working 24/7 destroying related documents. In a more general sense, the return of the concept of checks and balances, and oversight responsibility to the House and Senate spell bad news for the administration. According to this post at The Raw Story, they plan to use their new authority aggressively. Which news is sad for the administration, but true. And good news for America, which I am more than happy to report.

If things go the way US law going back to the Youngstown decision says it should, I may have to change my handle to HappyButTrue. There is still the chance that they will react like cornered rats and lash out, now that their every conceivable exit is blocked.