Or, the Nefarious Relationship Between Audits and Taxes

In their desperation, the GOP is telling everyone that if they vote for Democrats, the wicked Democrats will raise taxes. (According to Bush, Democrats are genetically disposed to raising taxes. I didn't know that Bush believed in or understood Genetics.)

This argument is laughable, in a tragic sort of way. Putting aside for a moment the fact that Bush's tax cuts have makedly favored the wealithiest of America's wealthy (some even say that Bush has presided of the largest transfer of wealth from to working to the upper class in the history of the nation, but who am I to blog without supporting links...), consider what has happened to Bush's employees who identified government waste and corruption in Iraq:

Investigations led by a Republican lawyer named Stuart W. Bowen Jr. in Iraq have sent American occupation officials to jail on bribery and conspiracy charges, exposed disastrously poor construction work by well-connected companies like Halliburton and Parsons, and discovered that the military did not properly track hundreds of thousands of weapons it shipped to Iraqi security forces.

Mr. Bowen’s office has inspected and audited taxpayer-financed projects like [a] prison in Nasiriya, Iraq.

And tucked away in a huge military authorization bill that President Bush signed two weeks ago is what some of Mr. Bowen’s supporters believe is his reward for repeatedly embarrassing the administration: a pink slip.

Our GOP congress has fired the unit that identified bribery, conspiracy, shoddy construction, and failure to track weapons in the war-for-profit battle zone of Iraq...because the GOP is dedicated to keeping taxes low...except when doing so interferes with their friends' profits.

Oversight. It's their worst nightmare, and they refuse to provide it.
And to think, it's been said that there is nothing the GOP won't do. 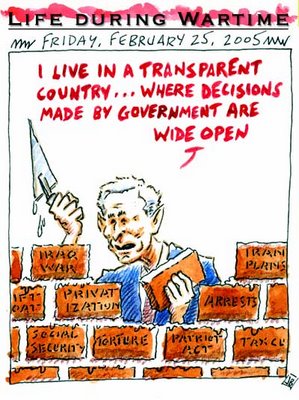