There's a Riot Goin' On

Or Were Cops Just Trying to Start One? 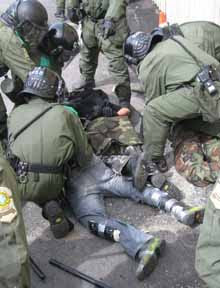 CBC Canada is reporting that police acted as agents provocateurs at a protest in Montebello Quebec against the so-called Security and Prosperity Partnership* (SPP.) Implementation of the SPP is on the agenda for the two day summit in Montebello between US President George Bush, Canadian Prime Minister Stephen Harper, and Mexico's President Felipe Calderone.

Police disguised as masked demonstrators tried to incite violence at the North American leaders' summit in Montebello, Que., on Monday protesters say, after footage of the incident was posted on YouTube Tuesday.
...
In (the video), three burly men with bandanas and other covers over their faces push through protesters toward a line of riot police. One of the men has a rock in his hand.

As they move forward, union leaders dressed in suits order the men to put the rock down and leave, accuse them of being police agents provocateurs, and try unsuccessfully to unmask them.

In the end, they squeeze behind the police line, where they are calmly handcuffed.

The RCMP has refused to comment, while Quebec Provincial Police have flatly denied that its officers were involved in the incident.

It (presumably the QPP) said it is not releasing any names as no charges were laid.


It's an old technique that reminds us of the Vietnam-era protests in the US, when police allegedly infiltrated groups like the SDS in order to discredit their opposition to the war. For those of you who don't know how this works, this from Wikipedia:

An agent provocateur (plural: agents provocateurs, French language, "inciting agent") is a person who secretly disrupts a group's activities from within the group. Agents provocateurs typically represent the interests of another group, or are agents directly assigned to provoke unrest, violence, debate, or argument by or within a group while acting as a member of the group.

An agent provocateur is often a police officer that encourages suspects to carry out a crime under conditions where evidence can be obtained; or who suggests the commission of a crime to another, in hopes they will go along with the suggestion, so they may be convicted of the crime. These are sometimes called sting operations.
...
Agents provocateurs are also used against political opponents. Here, it has been documented that provocateurs deliberately carry out or seek to incite counter-productive and/or ineffective acts, in order to foster public disdain for the group and provide a pretext for aggression..
...
Historically, Agents provocateurs activities have been one operational tactic of labor spies who may also be hired to infiltrate, monitor, disrupt, and/or subvert union activities.Within the United States the COINTELPRO program of the Federal Bureau of Investigation had FBI agents posing as political radicals in order to disrupt the activities of radical political groups in the U.S., such as the Black Panthers, Ku Klux Klan, and the Student Nonviolent Coordinating Committee.

Suffice to say, this is a slimy, underhanded and thoroughly disreputable tactic, in other words something fully worthy of Bu$hCo™ and their international corporatist lackeys. Unfortunately the Conservative Government of Stephen Harper is included in that lackey category. Harper would like to see himself in the position of Bush's lead poodle now that Tony Blair's out of the picture.

So were the masked instigators working for the police? Did they truly "squeeze behind the police line" where they were calmly handcuffed? (But significantly not unmasked - nor have the police identified them, since no charges were laid.)
SEE FOR YOURSELF
What I'm seeing there is a bunch of guys in masks who are built like cops and groomed like cops. When they are confronted by protest organizer Dave Coles, president of the Communications, Energy and Paperworkers Union of Canada, the fake protesters hide behind the cops in order to prevent being identified.

The Toronto Star has even more damning information;

Late Tuesday, photographs taken by another protester surfaced, showing the trio lying prone on the ground. The photos show the soles of their boots adorned by yellow triangles. A police officer kneeling beside the men has an identical yellow triangle on the sole of his boot.

Kevin Skerrett, a protester with the group Nowar-Paix, said the photos and video together present powerful evidence that the men were actually undercover police officers.

"I think the circumstantial evidence is very powerful," he said.

The three do not appear to have been arrested or charged with any offence.

Draw your own conclusions. It may have been the RCMP and/or the QPP were involved. Maybe not. Bush has lots of Secret Service, CIA and FBI people who will do that kind of work for him. In either case, it's a crying shame to see Bu$hCo's Police State being exported to Canada.

UPDATE: I've changed the link in the still picture at the beginning of the post. If you click now it will open up a very large detailed version of the picture, in which it can be seen that the boot of the cop (in uniform) kneeling is the same as that of the cop (pretending to be a protester) face down on the ground being arrested. Not just the yellow tag but the tread patterns are also identical. A comment on one blog that was covering this story said that the yellow tag just indicated that the boots had steel toes, and therefore proved nothing. As you can see, the similarity goes beyond just the yellow tag. Next time you try a stunt like this guys - change your frickin' shoes, fer gawdsake! More large, clear pictures here.

UPDATE 2: The Quebec Police have admitted to this idiocy, but insist that there's nothing wrong with what happened. Right, that's why they were denying it so vehemently for the last two days. I'll have a new post later. The new post is here.

Michael Byers says the agreement under discussion this week by Canadian, US and Mexican leaders Harper, Bush and Calderon should more properly be framed as a secret agreement to hand sweeping military, immigration and border control of all three countries over to the US. On Sunday, Byers, the Canada Research Chair in Global Politics and International Law at the University of British Columbia told a standing-room-only forum in Ottawa about the politics and persuasion connected with the agreement under discussion behind the barricades this week at Montebello, Quebec.

UPDATE 3: Station Agent posted on the anti-protest manual the Bush Administration wrote in 2002, which outlined ways to keep protesters out of The Decider's face.