The Canadian Wheat Board 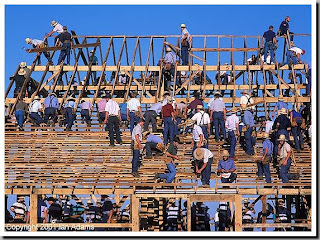 Green Libertarian asked me in comments if I knew anything about the Canadian Wheat Board. As it happened I had a fair idea of how it worked and where it came from, and a little research has fleshed that out. It's actually less boring than you might think. The history of the Wheat Marketing Board shows quite a contrast to the American laissez faire way of doing business.

The history of the Canadian Wheat Board (CWB) is grounded in the experience of farmers prior to World War I. Many farmers at the time felt captive to the railways, the line elevator companies, and the Winnipeg Grain Exchange for the delivery, weighing, grading, and pricing of their grain. They wanted greater power and protection for themselves in the grain marketing system. They developed a strong confidence in cooperative strategies and government intervention for addressing their needs and therefore established the Grain Growers' Grain Company in 1905 and put pressure on the provincial governments to establish provincially owned elevator companies in subsequent years and on the federal government to pass the Canada Grain Act in 1912 establishing the Canadian Grain Commission as the official weigher and inspector of grain.

I can anticipate a lot of criticism of this system from both the left and the right. From the right, it smacks of government intervention and interference with the workings of a free market economy. From the left, it looks like a monopoly was created, favoring the producer of a commodity. Couldn't this be a bad thing for the consumer? Maybe that criticism can be defused by the language that has been used to describe this since long before the Canadian federal government took it over for good in 1935 - 'wheat pools.' The pool concept just meant that farmers couldn't be played against their neighbours by unscrupulous grain dealers trying to drive the price down.

It was during World War I that the wheat board started to take the shape it has today, with the government's aim being to stabilize prices and production during potentially uncertain times. At the end of the war, what was then known as the Board of Grain Supervisors became the Canadian Wheat Board (CWB.) "The CWB's mandate was to sell wheat in domestic and export markets at prices in accordance with world levels. This meant that the Board could not determine the final value of wheat marketed on behalf of producers and the returns due to them until its sales for the entire crop year had been completed." That simple fact (in bold) should allay fears of the greatest evil presented by a monopoly - price fixing.

The whole thing looks to me like the ideal triumph of pragmatism over ideology. On one hand the price at the grain elevator is guaranteed by the government to be at least enough to keep the farmers from going into bankruptcy. On the other hand, since the price is determined by world markets, it can't go too high. So who loses? Well, it looks like "the railways, the line elevator companies, and the Winnipeg Grain Exchange" might have lost something, back in 1905 or so. But had their practices not been perceived by the farmers as exploitative and even parasitic the whole situation would never have arisen.

As I said, this is quite a contrast to the way that things are done in America. There was a time though, before farming was threatened by agribusiness (and their lobbying efforts in Washington,) that co-ops were the norm, not the exception. Mobster Unconventional Conventionist, who has been blogging here about the Farm Bill, took a look at a draft of this and had this response,

This was a common practice in the US prior to subsidies. Subsidies were introduced around the Depression, and actually worked for a while. Now though, corporately evolved US Agricultural policy is actually driving small farmers from the land, by lowering the price for Agribusiness/Huge producers, and making available land more expensive. Wheat subsidies in the US totalled $21.5 billion from 1995 - 2005, and the rate of small farmers abandoning their family farms continued to increase. Canada is doing it right, and should only consider trying things like we do it in the US if they really want to drive small farmers out.

Since NAFTA was passed, the Wheat Board has come under attack from American interests, who view its function as some kind of a government subsidy. This is ironic, no I meant to say disingenuous, since it is American and European farmers, not Canadians, who receive real subsidies from their governments.

Although the Board was reformed to meet free market conditions under the North American Free Trade Agreement and the World Trade Organization Treaty, American producers continually complain. Despite numerous challenges and much posturing by the United States, the World Trade Organization ruled in 2003 that the Wheat Board was a producer marketing body and not a system for government subsidy although the decision has since been overturned. In fact, Canadian producers have almost no government subsidy while their American and European Union counterparts are heavily subsidized. The attacks on the Wheat Board are one of the major irritants in bilateral relations between Canada and the United States. (from Wikipedia)

Even within Canada a number of concerns are now agitating for reform of the board, but I think this is coming from the large 'agribusiness' sector rather than from individual farmers. There is a fairly large conservative faction in Alberta especially that would like to see Canada come more into line with the way things are done in the US. The only entities that might have anything to gain from that move would be large agri-corps like Monsanto and ADM. Unfortunately, the smaller farmers are too busy doing their chores to be bothered lobbying the influence peddlers of Washington D.C.

The main point I'm trying to make goes way beyond just the agriculture industry. Here's an example of how things can be done when the government is allowed to do what's best for the people, rather than in furtherance of a purely corporate-friendly agenda. I should note that the conservatives don't have a problem with the government intervening in the marketplace on their behalf, they just don't like it when it is for the general good.

This all goes back to the ideological rut that the US of A has been in at least since the end of World War II. The kind of self-interested collective behavior shown by Canada's farmers would be condemned as communism in the USA, because it takes power out of the hands of the corporations.

Friendly neighbors co-operating with one another, like the Amish barn raisers in the graphic above, are suspect. When you think about it though, a corporation is just another type of collectivization, but with capital and profit being the guiding principles. This worship of Adam Smith has, I think, gone too far.

UPDATE: Reuters has this report on Canadian Prime Minister Stephen Harper's efforts to do away with the Wheat Board altogether. Fortunately the Canadian federal courts ruled that he didn't have the authority. Ahem, uh.. America, if you're listening - that's what's supposed to happen when your political leader does something that is patently illegal. Just sayin'.