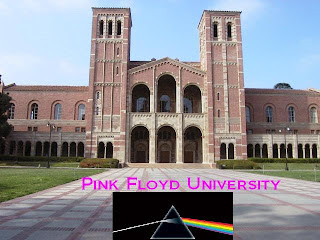 “Did we tell you the name of the game, boy? We call it riding the gravy train.”

This particular Pink Floyd song, from 32 years ago (ouch – I remember buying the album) is a famous indictment of the recording industry. And when you stop to think about it, the recording industry is a lot like how our government is today. While the Patriot Act deprives us of privacy and other freedoms, how different is Sony and its root-kitting? Not much. Spying is spying, after all.

Where I want to draw particular emphasis is the riding of the gravy train. This is exactly what the politicians want. An Easy Ride. They consistently prove this by offering platitudes, and mealy mouthed nothingness in terms of positions on real issues. This is my acid test for the difference between a politician and a leader:

If there’s a plan about making a plan, it’s a politician you smell. If it’s a bold stake on a position, with only a nod to cost, be it moral or monetary, that’s a leader. I call this the FDR test. You might find that unsettling, and fine. Leaders are constantly unsettled and that’s the mental reference. Hang on here, Pink Floyd is coming back into this mix, but;

We must be fair, and you must recall; the Department Of Dirty Tricks is a moniker coined during World War II about the fine brained folks at

Bletchley Park in Britain. The Polish stole the Enigma coding device the Nazis were using and handed it over to Bletchley folks. (We may thank Sir Collin Gubbins for this effort, and the mighty Polish underground, fighting a mad retreat in the face of the Blitzkrieg.) They then used Enigma information to their advantage, without a moral guidance, only a tactical or strategic effect. This lead to more than one bombing disaster on friendlies revealed only years later.

Was that right or wrong?

In that case I say it was right. There was such limited use of secrecy, and then the “sunshining” of it relatively immediately after the fact. These are not the purposes, methods or procedures of today’s misadministration. The only thing these folks are doing is UNDOING the Constitution and the system of checks and balances of power. So there’s your second acid test.

“Money, get back.
I'm all right Jack keep your hands off of my stack.
Money, it's a hit.
Don't give me that do goody good bullshit.
I'm in the high-fidelity first class traveling set
And I think I need a Lear jet.”

Do ya REALLY need a Lear Jet? And exactly HOW MANY MILLIONS must you have? After you get, oh, I dunno, 4 or 5, ISN'T THAT ENOUGH!

So come in, and have a cigar. We got a deal and a bunch of money to make. Politics is GREAT!

Next in the series, Pink Floyd deals with the political war pigs directly from a bygone time, and also makes mention of the sheeple. But hey, at the end of the series I do totally lighten up. I ride a Bike and remember friends.

We become and are the America we deserve. Step up!