The Debate That Wasn't

...But So Easily Could Have Been 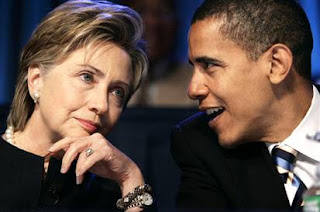 Pretty much everybody in Greater Left BlogSylvania has given an emphatic thumbs down to ABC News for their execrable performance 'moderating' last night's so-called debate between the remaining Democratic primary candidates. Crooks and Liars quickly declared, "Attention ABC: You're Hurting America!" and in a later post linked a lot of the reaction from their journalistic colleagues;

E&P’s Greg Mitchell called it “perhaps the most embarrassing performance by the media in a major presidential debate in years.” The Washington Post’s Tom Shales called it “step downward for network news,” and noted that the moderators delivered “shoddy, despicable performances.” Will Bunch noted, “Quickly, a word to any and all of my fellow journalists who happen to read this open letter. This. Must . Stop.” Salon’s Walter Shapiro added:

This is the way it ends, not with a bang but a whimper. If Wednesday night’s fizzle in Philly was indeed the last debate of the Democratic primary season between Barack Obama and Hillary Clinton, it will be remembered for, well, not much of anything.

Broadcast to a prime-time network audience on ABC and devoid of a single policy question during its opening 50 minutes, the debate easily could have convinced the uninitiated that American politics has all the substance of a Beavis and Butt-Head marathon.

These are typical responses, with more Here, Here, and Here from Huffington Post, Here from Talking Points Memo, Here from Truthdig... A lot of the posts use adjectives like 'shameful' and 'embarrassing' or Josh Marshall's 'unmitigated travesty.' Many quote Tom Shale's editorial, but the best link to and/or quote Will Bunch at Attytood:

With your performance tonight -- your focus on issues that were at best trivial wastes of valuable airtime and at worst restatements of right-wing falsehoods (my emphasis), punctuated by inane "issue" questions that in no way resembled the real world concerns of American voters -- you disgraced my profession of journalism, and, by association, me and a lot of hard-working colleagues who do still try to ferret out the truth, rather than worry about who can give us the best deal on our capital gains taxes. But it's even worse than that. By so badly botching arguably the most critical debate of such an important election, in a time of both war and economic misery, you disgraced the American voters, and in fact even disgraced democracy itself. Indeed, if I were a citizen of one of those nations where America is seeking to "export democracy," and I had watched the debate, I probably would have said, "no thank you." Because that was no way to promote democracy.

To say that this is the smoking gun that belies the idea of a left-leaning bias in the media would be a gross understatement of the plain truth. To say that ABC has completely blown their cover as anything other than a shill for the Republican party (and we SO need more of those with FOX, CNN, etc., etc., all acting as Republican megaphones /snark) almost goes without saying.To belabor the point further would accomplish nothing (he says after belaboring the point into the ground.) So, I admit, it is only now that I begin this post properly, with another point brought up in yet another post at DailyKos. The Great Orange Satan himself brings up a seemingly innocuous point that really needs to be expanded upon:

I honestly don't understand why Democrats haven't learned to ignore the bullshit substance-less questions and simply say, "Okay, that's a dumb question. Let's talk about something people care about, like the housing crisis."

Just bypass the idiotic questioners and talk about the things that the Democratic primary electorate actually want to talk about.

Trust me, they'll get brownie points, and the idiot questioners will look like idiots in the process.

Good point. DAMN good point in fact. Why didn't the Democratic presidential candidates - who are vying for the most powerful job in the world, who represent a party that has earned a reputation of being a collection of spineless wimps, who desperately need to shed that characterization - take an opportunity to EMPOWER themselves in the eyes of the US electorate, TAKE CONTROL of the situation and SHOW SOME LEADERSHIP for a change? The fact that they didn't is almost as shameful as ABC's handling of the debate, when you consider it in context.

Obama: I don't think that question is of much concern to the American people, George. (bonus points here if Obama can cite survey showing exactly how few people actually care about this) And I won't, by providing an answer, embarrass you for having asked it.

Audience: Overwhelming and sustained applause. Several voices can be heard yelling 'Shut up George. Just shut the f#$k up.'

Obama: Instead I'd like to talk about the direction this country should be taking in foreign policy. That OK with you Senator?

Clinton: (takes the timer, turns it over) OK, now I'd like to talk about my plan to provide affordable health care for all Americans.
...
...and so on,
...and so on,
...
Gibson: OK, I hate to interrupt, but we have to break for commercial now.

During the commercial break the two candidates let the moderator and news director know that if they don't want to completely lose all credibility with their viewers (which they seem to have done regardless, at least as far as Democrats are concerned) they had better play nice after the break.

Considering the fact that the studio audience actually booed, jeered and heckled Charles Gibson as he was going to break, Kos's judgment that they would have gotten brownie points looks pretty sound. So a huge opportunity was lost. And I think that a case can be made that what did happen last night was predictable enough that Obama or Clinton really could have showed up at the studio with an egg timer in their pocket or handbag, prepared for the worst.

Consider the magnitude of this lost golden opportunity. An act like described above could well have completely destroyed a key weapon in the Republican arsenal: media complicity. This would have been such a DEFINING MOMENT in the campaign as to have a resonating effect on every moment that came after. Every news item on every media outlet, TV, radio and print would have instantly been framed with the expectation that bullshit was now going to be called bullshit. Every pundit would be aware that what they said was actually being listened to and evaluated not only for its truth but also for its relevance. The substitution of style for substance would have been utterly forestalled, and with very little effort. And I for one believe that on substance the Democrats can cruise to a win in November.

What a crying shame that only Kos thought of this, and only after the fact. An independent media, free of undue corporate influence, is as essential as independent politicians and parties. And you're not going to get the latter unless you fight for the former.