The Definition of Fascism 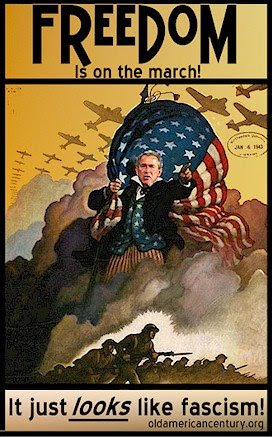 Me and my big mouth (er, .., keyboard.) Having promised to do a series on fascism in America I find myself with an embarrassment of riches in terms of links to pursue and connections to research. Make no mistake, the idea of a movement to exert fascistic influence over American society is not a rhetorical device, nor by any means hyperbolic. Naomi Wolf points out that it's not hyperbole if one compares present day America to Italy in the 1920s or Germany in the 1930s, when fascists were taking over those countries. And the ten-point blueprint that she lays out for repressive regimes certainly has a chilling similarity to the actions of the Bush regime. Just to remind you, here's Naomi's list:
There's a longer list with 14 points, the work of Laurence Britt in this article at Secular Humanism.org. If that isn't convincing enough POAC (The anti-PNAC website) has posted numerous links to examples of where the U.S.A. conforms to Britt's model HERE. I daresay that some of these trends predate the Bush administration by decades. As we shall see. Without resorting to a list of methods or characteristics the most succinct definition of fascism I could come up with comes from Robert F. Kennedy Jr.:

Anyone familiar with the structure of American society would be hard pressed to deny that the country doesn't fit that definition. There are 30,000 registered lobbyists in Washington, outnumbering legislators nearly 60 to one. Large campaign contributors expect a payback from whichever horse (did I say horse? I meant whores) they back in an election, and they often back both candidates just in case. The government is adamantly trying to obtain retroactive immunity for corporations who knowingly committed crimes (on behalf of the government, or course. And when an election comes, you get to vote for one of two corporate-friendly candidates from one of two corporate-friendly parties, and the vote may be flipped by a machine running secret software that is the private property of a corporation.

One other thing you may have heard of. A recent war was infamously started for the apparent benefit of no-one other than the military industrial complex, at great cost to the nation as a whole. The US military costs the country more than the combined military budgets of the entire rest of the world, but still the government feels it has to hire contractors (all with connections to administration higher-ups) to get the job done. That is simply astonishing and can only be explained one way.

When you look at how these contract workers get paid you see what the job is, and that it will never get done under the current way of doing things. Typically a mercenary will get $500.00 a day for his services, but his employer charges $800. The thing is, he doesn't charge the government $800, he charges another contractor, who in turn charges the government $1,000. That's the way it works. So obviously the job they're trying to get done is to steal as much from the taxpayer as possible, and the Great War on Turr is merely a canard, a means of keeping the gravy train rolling. And one of the things about gravy trains is that they tend to gain a lot of momentum, especially since there are a lot of people with a vested interest in greasing the wheels and polishing the tracks they run on. Don't believe me? Google the term 'sailboat fuel.'

War against a foreign country only happens when the moneyed classes think they are going to profit from it.
-- George Orwell --

The aim of Bu$hCo's brand of fascism is not just to provide profits to corporate cronies, but also to put them out of reach of all responsibility for their actions. The heinous acts committed without consequence by Blackwater/KBR mercenaries in Iraq are a case in point. The government has literally become a partner in crime with the multinationals. And then there's this from a recent New York Times:

In a major shift of policy, the Justice Department, once known for taking down giant corporations, including the accounting firm Arthur Andersen, has put off prosecuting more than 50 companies suspected of wrongdoing over the last three years.

Instead, many companies, from boutique outfits to immense corporations like American Express, have avoided the cost and stigma of defending themselves against criminal charges with a so-called deferred prosecution agreement, which allows the government to collect fines and appoint an outside monitor to impose internal reforms without going through a trial. In many cases, the name of the monitor and the details of the agreement are kept secret.

The reaction of the corporations to this new trend are woefully predictable.

Some lawyers suggest that companies may be willing to take more risks because they know that, if they are caught, the chances of getting a deferred prosecution are good. “Some companies may bear the risk” of legally questionable business practices if they believe they can cut a deal to defer their prosecution indefinitely, Mr. Khanna said.

Legal experts say the tactic may have sent the wrong signal to corporations — the promise, in effect, of a get-out-of-jail-free card.

I would be lying to you if I said that this was something new in American history. Watch this clip:
Chomsky on Corporate Propaganda
Here's the part I'd like to point out:

As (James Madison) put it, 'the primary responsibility of government is to protect the minority of the opulent against the majority.'

One of the things that emerged from the Congress of the Confederation was the Electoral College, the subject of a recent post by law professor Jonathan Turley.

While the Framers were great believers in the natural rights of the common man, they actually had little faith in the judgment of the common man. Indeed, most of the Framers were unflinching, unrepentant elitists. They wanted a representative democracy to create a buffer of educated men between citizens and their government. It was not until 1913 that the country finally amended the Constitution to allow for direct election of senators (who were originally elected by state legislatures).

Throughout U.S. history, the Electoral College has worked as designed: to place elections in the hands of an elite. Past controversies involved the same personal wheeling and dealing that we’re seeing today with superdelegates.

We've seen Turley's views before on various matters, notably the Prosecutors' Purge scandal, and the wider implication that the prosecutors who weren't purged, as well as the one's who replaced the dismissed US Attorneys have turned the Department of Justice into a partisan playground of Republican corruption. It's a good thing at least that the cases are tried before elected and uncorruptable federal judges. Er, nope.. as Turley again points out.

This week, Michael Gableman celebrated a considerable victory: the first defeat of an incumbent judge in 40 years for the Wisconsin Supreme Court. His opponent Louis Butler was also the first African American on the Court. Yet, the $5 million race shows the steady trend toward high-priced campaigns to change the make-up of courts by legal and corporate interests.

So to recap: The laws of the country are written by bought and paid for corporate-friendly hacks, prosecuted by more partisan corporate hacks and tried in front of judges who are already pre-bribed by corporations before they even take the bench. If the outcome is in question the appeal could go all the way to the ultra-partisan corporate friendly Supreme Court.

Earlier I criticized James Madison for the error of the Electoral College. I should say that he WAS the author of the Constitution and Bill of Rights, so on the whole he redeemed himself in spades. He also wrote this gem, another definition:

The accumulation of all powers,
legislative, executive, and judiciary,
in the same hands
may justly be pronounced the very definition of a tyranny."
-- James Madison --

But don't get me started on tyranny in America. I think I have my hands full with fascism, thank you very much.