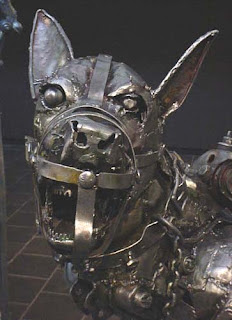 Crocker and Petraeus came to the Hill and barked at both Houses this week. It's high time that they, and their fellow pack of barking dogs in the mal-Administration, the House, the Senate and the Traditional Media should be muzzled.

Bush and his "War Council" are truly the "Dogs of War."

The use of the phrase "Dogs of War" is generally recognized to come from Shakespeare's play Julius Caesar, from a speech Antony gives:


(Sorry Shakespeare fans; I couldn't resist. Hey, it still scans properly. To atone, here is a vintage offering of the whole 2 minute soliloquy by Marlon Brando.)

Since all the Pink Floyd members were schooled in Britain, I am certain they all were and are aware of the origins of the phrase, and I think a look at some snips of the lyrics justifies this thought:

Hell opened up and put on sale
...
Hollow laughter in marble halls
...
Has unleashed the dogs of war

Hell opened up. On Sale. Marble halls. Dogs of War. From Caesar's time, through Shakespeare's and ours, it's remarkable how some things about human society just don't change. When you read the lyric set at the end, after what is to come, I believe you'll come to understand why I say "everything I need to know about politics, I learned from Pink Floyd." Pink Floyd is just damn prescient, yet rooted in what they know of history. It's remarkable.

There are these two-legged dogs of war that I call out at the beginning of this post, and there are also the four-legged variety. There is one lucky dog and one tragic dog in the two videos below. WARNING: Both videos are disturbing to watch.

This Illegal Occupation/War is eating our collective soul. Why? To win? Win exactly what?

And the barking war dogs Crocker and Petraeus think we're fooled by their testimony? Not a chance. Senator Joe Biden destroyed the arguments handily.

The very worst part of all this is that this mal-Admnistration is really didn't even "cry havoc." It was quickly done with whispers and in secret that they actually invoked the hell to come that would devour our sensible spirits and shock us into this insensate state of "...all pity choked with custom of fell deeds."

To end, here are the complete lyrics to "Dogs of War" and a particularly apt Youtube. Emphases in the lyrics are mine, and reflect what I think are characteristics of the "
Dogs of War Cabinet" players, and chiefly those of Bush/Cheney:

Dogs of war and men of hate
With no cause, we don't discriminate
Discovery is to be disowned
Our currency is flesh and bone
Hell opened up and put on sale
Gather 'round and haggle
For hard cash, we will lie and deceive
Even our masters don't know the web we weave

Invisible transfers, long distance calls,
Hollow laughter in marble halls
Steps have been taken, a silent uproar
Has unleashed the dogs of war
You can't stop what has begun
Signed, sealed, they deliver oblivion
We all have a dark side, to say the least
And dealing in death is the nature of the beast

The dogs of war won't negotiate
The dogs of war don't capitulate,
They will take and you will give,
And you must die so that they may live
You can knock at any door,
But wherever you go, you know they've been there before
Well winners can lose and things can get strained
But whatever you change, you know the dogs remain.