HopeSpringsATurtle recently nominated this Unruly Mob for an Excellent Blog Award, for which we are truly grateful. Unruly, mobbish, pitchfork and torch loaded, yet grateful. The Mob has graciously consented to let me present the following unruly consensus of not only Excellent but Fabulous blogs. So, we continue with the spirit of the award, and following are the blogs we wish to honor.

First, on this cycle, JollyRoger of Reconstitution was noted and awarded, and passed the honor to Hope of Deep Confusion and to Christopher of From the Left as well. You folks are great blogmates and we wanted to make sure and acknowledge all three of you fine bloggers. Kudos to you and keep up the fine work! What we Mobsters are doing is passing the love further down the road. All of you may expect an unruly, rude or snarky comment from me today on your blog. (I know, just what you've been waiting for. )

Without further ado (video version first, text following for dial-up users) The Mob would like to recognize:

Blue Gal: Blue Gal. Smart. Connected. A Zen Blog Mistress for folks just getting into blogging. She's one of the finest humans on the intertubes. We find her panty-thing quite unruly, as we at the Mob are often pant-free. BG, we all hope your move to your new place goes extra smooth for you!

We move from one of the the finer humans on the intertubes, to some fine simians.

Dr. Zaius: Who else could chronicle the solving of the Iraq War by the Partridge Family! Aside from the fact that Dr. Zaius is just flat out cool, (despite the fact that he usuallly has "No time for blogging today!) there's a bizarre feature about his age. He is actually NEGATIVE 1787 years old! I think he doesn't look a day over Negative 1788. I am sure folks will not use age-ism as a reason to not vote for the Zaius/Gregarious '08 ticket, the only Ape/Lesbian ticket I know of this cycle. Besides, Dr. Zaius fights crime!

And by crime I mean Dr. Monkey Von Monkerstein of Monkey Muck, our next Excellent Blog of note. Quite an unruly simian in his own right. I love the "Cooking with Dr. Monkey" posts the most, but I wonder if that's because I am under the influence of the "Monkerstein Mind Control Fez." Could be. But it was more likely that admiration of Dr. Monkerstein zenithed when he kicked Cindy McCain off his blog! Dr. Monkerstein just recently had his First Blogoversary too. Congratulations!

From the Fez, to the Cowboy Hat.

Len's most recent series culminating in Bush's Conspiracy to Create an American Police State: Part VI, The government places itself above the law is both thorough and disturbing. Read the whole series.

And for another recent writer of a series, DistributorcapNY: DCap wrote a series leading up to Passover about acts of bravery during that heinous and dictatorial time of the Nazis, culminating in this post: Poignant, moving and relentless when we consider there is rampant spinelessness today.

When you look at that final "Acts of Bravery" post by DCap, you'll see the first comment is by FranIAm, the next nominee for an Excellent Blog Award from the Mob. Fran is Smart. Funny. Irreverant. I'll do my best to pronounce "masturbatorium." Don't take it personally Fran.

But wait! Yes I Do Take It Personally Profmarcus recently blogged about food issues, near and dear to me as long time Mob readers know, and that's not the only topic. Several of the Mobsters have favorite posts and posters at YIDTIP.

Speaking of food, Eat. Your. Grain. Tengrain of Mock, Paper, Scissors that is. With brevity of wit, simultaneously profane and elegant. Bravo!

More Bravo; driftglass is a legend. His visual work is beyond remarkable. 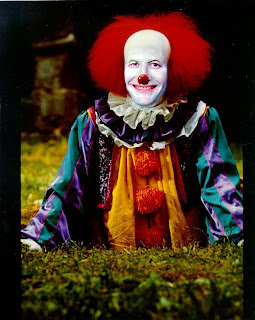 The Spam Catcher Mark II as a perma-post till the end of this month is a brilliant use of blogger technology and is just the "ut" if you ask me."So Fear Me. And so forth."

We can't go to black without Fade. "Dick Cheney is Mr. Drysdale" is just one recent example Fade's talent.

So thanks again to HopeSpringsATurtle for nominating this unruly crew. We all really appreciate it. Blog On!