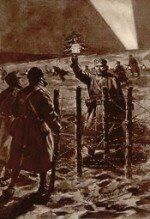 In the spirit of the season, a feel good article that should give hope to peacemakers. Found this at Progressive Dems who crossposted it at the Nation.

On November 11 of this year--the 80th anniversary of that 11th hour of the 11th day of the 11th month when World War I ended--there was dedicated in Frélinghien, France, a memorial to the most remarkable event not merely of that particular conflict but perhaps of all conflicts.

The memorial recalls a soccer game played on Christmas Day, 1914, between men from the 2nd Battalion of the Royal Welsh Fusiliers and the 134th Saxon Infantry Regiment.

The Saxons regiment won the game 2-1.

Then, the two teams partook of plum pudding proffered by the Welshmen and a barrel of beer rolled onto the field by the Saxons. They sang a few carols and hung candles from a bush in the rough fashion of a Christmas tree.

It was "a quite social party," one soldier wrote home to his family.

This was no ordinary holiday party, however.

It was, the soldier suggested, "the most memorable Christmas I've ever spent."

Those who know their military history will recognize that what was remarkable about the game was that it involved soldiers in the service of the British king and German kaiser who, only hours before, had been battling one another--and who, in short order, would be battling once again.

They were participants in an event that was almost lost to history--the Christmas Truce of 1914.

The British and German governments denied that the truce even took place.

War historians neglected this chapter in the story of "the war to end all wars."

But those who participated in the truce remembered it.

In his last years, as rumors of the truce attracted the attention of new generations of historians and journalists, Anderson found finally that his recollection of that Christmas Truce of 1914--a brief respite from the carnage of World War I that saw soldiers of both sides in the conflict lay down their arms, climb out of their trenches and celebrate together along the 500-mile Western Front.

Anderson was the last surviving old soldier known to have participated in what he would refer to in his later years as "a short peace in a terrible war."

That peace, which was initiated not by presidents or prime ministers, but by the soldiers themselves, serves to this day as a reminder that war is seldom so necessary--nor so unstoppable--as politicians would have us believe.

So it comes as no surprise that the Christmas Truce of 1914 is a bit of history that many in power have neglected over the past 90 years.

But Anderson's long survival, and his clear memory, made it impossible to write this chapter out of history.

On December 25, 1914, Anderson was an 18-year-old soldier serving with 5th Battalion, Black Watch, of the British Army, one of the first to engage in the bloody trench warfare that was the ugliest manifestation of a war that claimed 31 million lives. But on that day, there was no violence.

Rather, Anderson recalled in an interview on the 90th anniversary of the truce, "there was a dead silence that morning, right across the land as far as you could see. We shouted 'Merry Christmas,' even though nobody felt merry."

The Brits responded by singing "Silent Night" in English. Then, from the trenches opposite them, climbed a German soldier who held a small tree lit with candles and shouted in broken English, "Merry Christmas. We not shoot. You not shoot."

Thus, began the Christmas Truce. Soldiers of both armies--more than a million in all--climbed from the trenches along the Western Front to exchange cigarettes and military badges. They even played soccer, using the helmets they had taken off as goalposts. And they did not rush to again take up arms. Along some stretches of the Front, the truce lasted into January of 1915.

Thus, it has ever been with war. As George McGovern, the decorated World War II veteran who would become one of America's greatest champions of peace, "old men (are always) thinking up wars for young men to die in."

But Anderson remembered, well beyond the century of two world wars and too many lesser conflicts, that the young men of opposing armies often have more in common with one another than they do with the old men who send them into battle.

Once, on a Christmas Day that ought not be forgotten, young men decided to make a short peace in a terrible war.

Ninety years on, Alfred Anderson and his comrades in the Christmas Truce of 1914 have a memorial.

Like most memorials erected along what was the western front, it recalls warriors.

But this is a monument to peace.

It invites us to recall the courage of those who chose, however briefly, to see the humanity in one another, and to lay down the arms of one of the most brutal wars this planet has ever seen, offers hope this weekend, as Christians mark the birth of the Nazarene who was called Prince of Peace. Perhaps, someday, we will make a Christmas truce that lasts not merely through the hours of good cheer on this Holiday but the whole year long.

Hello, yeah this post is in fact good and I have learned lot of things from it concerning blogging.