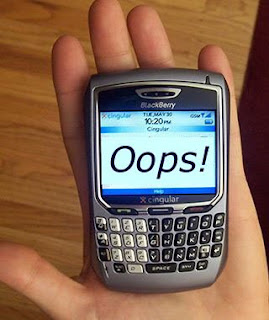 You'd think that more than a month after the election the McCain campaign would be finished at least with making glaring mistakes. You would be wrong.

You may recall this story from PC World posted a couple of weeks ago:

What do you do when you lose a presidential election by a sizeable margin? Sell everything associated with your prolonged failure, that's what! The McCain-Palin campaign is selling leftover equipment -- including some sweet tech -- at bargain basement prices at McCain's Arlington, Virginia headquarters.

"Starting Monday December 8, 2008 the prices will be slashed to 36% of the original price for furniture, office supplies, blackberries, and many campaign computers. This is a great opportunity to own a piece of history, finish your Christmas shopping, or simply replace your old laptop."

I don't know about you, but owning a "piece of history" shouldn't be on par with replacing "your old laptop."

Among the tech goodies for sale are:

Wowwie! Those are some primo deals. But I'm holding out for the Blackberry that McCain invented, or the computer used by Palin to discover that Africa is not, in fact, a country.


So how did that work out? Fast forward to a few days ago, and this story. From ChannelWeb:

According to the reporters' take, the campaign was selling off used office inventory at bargain prices at its headquarters, including phones, computers and other equipment. Among the hot items, several $20 BlackBerry smart phones with dead batteries and no chargers included. The reporters bought a couple.

"When we charged them up in the newsroom, we found one of the $20 BlackBerry phones contained more than 50 phone numbers for people connected with the McCain-Palin campaign, as well as hundreds of emails from early September until a few days after election night," Fox 5 investigative reporters Tisha Thompson and Rick Yarborough wrote in their account.

The pair was able to trace the BlackBerry back to a "Citizens for McCain" staffer, a group of Democrats that put their support behind the Republican presidential nominee. According to the reporters, the emails offered an inside glimpse into how grassroots operations work and included a host of scheduling questions and please (sic) for support.

Many of the numbers the campaign failed to wipe, or permanently delete, from the device were private cell phone numbers for campaign leaders, politicians, lobbyists and journalists, the report said. Failing to remove information from a device before selling it could result in a serious breach of security.

Selling an unwiped BlackBerry is not really a flub expected from McCain, considering one of his advisors once credited McCain with inventing the smart phone.

The pair decided to call some of the numbers.

"Somebody made a mistake," one owner told them. "People's numbers and addresses were supposed to be erased."

Another noted: "They should've wiped that stuff out," later adding "Given the way the campaign was run, this is not a surprise."

Maybe McCain didn't invent the smart phone after all. Seems to me that the phone, like any piece of high-tech equipment, is only as smart as the person using it. McCain deserved to lose, and the nation dodged a bullet when it elected Barack Obama. It continue to be the case that no matter how disappointing the Democrats are, the Republicans are much, much worse.