Rescued From the Memory Hole

Once again, three cheers for Keith Olbermann. This time the laurels are awarded for his piece comparing George W. Bush's 'legacy talking points' with reality. It should be 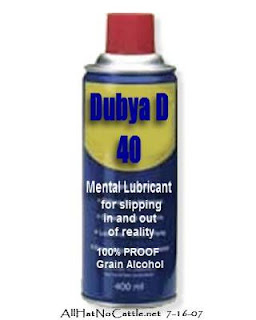 presented with reference to this infamous quote from a Ron Suskind article in the NYT, from October 17, 2004, the quote attributed by Suskind to an unnamed Bush aide. (Source: Wikipedia)

The aide said that guys like me were "in what we call the reality-based community," which he defined as people who "believe that solutions emerge from your judicious study of discernible reality." ... "That's not the way the world really works anymore," he continued. "We're an empire now, and when we act, we create our own reality. And while you're studying that reality—judiciously, as you will—we'll act again, creating other new realities, which you can study too, and that's how things will sort out. We're history's actors…and you, all of you, will be left to just study what we do."

Those of us, including Olbermann, who inhabit the reality-based community don't think it works that way, but the Bush-bots persist in their delusions. K.O. schools them all, in what I think is one of his best segments ever.

Oh, and by the way - Richard M. Nixon really was a crook despite all of his efforts to portray himself otherwise. This attempt at legacy tweaking is destined to fail just like everything else the Worst President Ever has tried his hand at. I mean really, how many Texas Rangers fans believe today that trading Sammy Sosa was a good move?

~~~~~~~~~~~~~~~~~~~~~
Instant Update/Further Reading: This is a great piece from BBC News looking back on Britain's attempted occupation of Iraq back in the 1920s - an utter failure that could well be compared to the current mess there.

As the insurgency spread, the letters from the British diplomat in Baghdad grew bleaker. "We are in the thick of violent agitation and we feel anxious… the underlying thought is out with the infidel."

And then: "The country between Diwaniyah and Samawah is abandoned to disorder. We haven't troops enough to tackle it at present."

A month later: "There's no getting out of the conclusion that we have made an immense failure here."

In fact, this insurgency was in 1920, the uprising against the British occupation of what was then still Mesopotamia. The diplomat was Gertrude Bell, an energetic and passionate Arab expert who literally drew Iraq's borders.