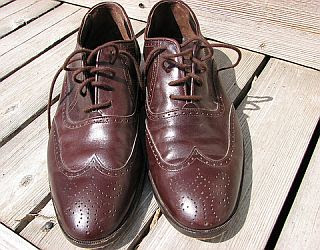 The brother of the Iraqi journalist who threw his shoes at US President George W Bush has said that the reporter has been beaten in custody.

Muntadar al-Zaidi has suffered a broken hand, broken ribs and internal bleeding, as well as an eye injury, his older brother, Dargham, told the BBC. Mr Zaidi threw his shoes at Mr Bush at a news conference, calling him "a dog".

The head of Iraq's journalists' union told the BBC that officials told him Mr Zaidi was being treated well.
[...]
Mr Zaidi told our correspondent that despite offers from many lawyers his brother has not been given access to a legal representative since being arrested by forces under the command of Mowaffaq al-Rubaie, Iraq's national security adviser.


Not to put too fine a point on it, but my definition of being treated well does not result in a broken hand, broken ribs, internal bleeding and an eye injury. Nor does this brutal response jibe with Bush's own protestations that 1) it wasn't that big a deal and 2) that it was somehow an example of the new freedoms that Iraqis enjoy thanks to the heroic efforts of US troops. And we already know too well that Bush's definition of freedom includes being locked up in a cell indefinitely and denied legal representation.

As the same BBC article shows, Mr. Zaidi is now regarded more as a hero than a criminal - which hardly bodes well for Bush's attempts to pass the whole thing off as insignificant. Reaction to the incident only underlines how misguided it is to brutalize someone who now has a reputation as a hero in the Middle East.

Our correspondent says that the previously little-known journalist from the private Cairo-based al-Baghdadia TV has become a hero to many, not just in Iraq but across the Arab world, for what many saw as a fitting send-off for a deeply unpopular US president.
[...]
The shoes themselves are said to have attracted bids from around the Arab world. According to unconfirmed newspaper reports, the former coach of the Iraqi national football team, Adnan Hamad, has offered $100,000 (£65,000) for the shoes, while a Saudi citizen has apparently offered $10m (£6.5m).

The daughter of Libyan leader Muammar Gaddafi, Aicha, said her charity would honour the reporter with a medal of courage, saying his action was a "victory for human rights". The charity called on the media to support Mr Zaidi and put pressure on the Iraqi government to free him.

Does anybody remember back when Bush was trying to sell this war to the American people, the UN and an array of countries who might join the coalition of the willing? One of the talking points was how the general Arab and Muslim world would embrace American intervention in the region and move towards a more stable and US-friendly footing. How's that working out for you Mr. Bush?