This Explains a Lot 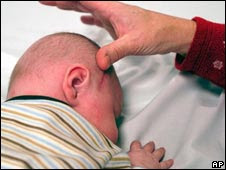 From BBC News: Baby born with 'foot in brain'

US surgeons operating on a brain tumour in a baby boy found a tiny foot inside his head.

Doctors operated on three-day old Sam Esquibel after finding what looked like a microscopic tumour on an MRI scan.

But while removing the growth, they also found a nearly perfect foot and the partial formation of another foot, a hand and a thigh.

The growth may have been a case of "foetus in foetu" in which a twin begins to form within its sibling.

However, the team at Memorial Hospital for Children in Colorado Springs said such cases very rarely occur in the brain. 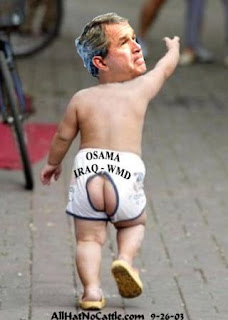 It may also have been a type of congenital brain tumour.

Although extremely rare this is not the first time that such a congenital defect has happened in America. In the first instance the infant was born July 6, 1946 in New Haven, Connecticut. Doctors at the time were unable to perform the delicate surgery to remove the foot. Sadly the foot has now grown to a size 10 (how ironic is that?) leaving little room inside the skull for any brain. Even more sadly the first infant went on to become President of the United States of America.

Email ThisBlogThis!Share to TwitterShare to FacebookShare to Pinterest
Labels: Satire