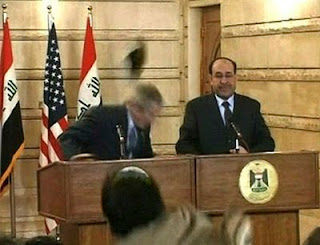 Can we get a BWA HA HA for this item from the BBC?

" A surprise visit by US President George Bush to Iraq has been overshadowed by an incident in which two shoes were thrown at him during a news conference.

An Iraqi journalist was wrestled to the floor by security guards after he called Mr Bush "a dog" and threw his footwear, just missing the president.

The soles of shoes are considered the ultimate insult in Arab culture.

His previously unannounced visit came a day after US Defence Secretary Robert Gates told US troops the Iraq mission was in its "endgame".

In the middle of the news conference with Mr Maliki, a reporter stood up and shouted "this is a goodbye kiss from the Iraqi people, dog," before hurtling his shoes at Mr Bush, narrowly missing him.

"All I can report is a size 10," Mr Bush said according to the Associated Press news agency "

Laugh My Frickin' Ass Off!!

Thousands of Iraqis have demanded the release of a local TV reporter who threw his shoes at US President George W Bush at a Baghdad news conference.

Crowds gathered in Baghdad's Sadr City district, calling for "hero" Muntadar al-Zaidi to be freed from custody. There were similar scenes in Najaf.

Officials at the Iraqi-owned TV station, al-Baghdadiya, also called for the release of their journalist.

This just keeps getting better and better. The only thing is Bush is such a delusional psychopath that the insult will roll off of him like water off a lame duck's back.