A Big Lump of Coal From Conservative Santa 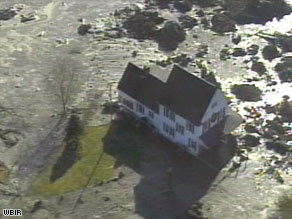 How would you like your preparations for Christmas to be interrupted by something like this?
Ho Ho Ho-rrendous.

A wall holding back 80 acres of sludge from a coal plant in central Tennessee broke this week, spilling more than 500 million gallons of waste into the surrounding area. Environmental Protection Agency officials are on the scene and expect the cleanup to to take four to six weeks.

The sludge, a byproduct of ash from coal combustion, was contained at a retention site at the Tennessee Valley Authority's power plant in Kingston, about 40 miles east of Knoxville, agency officials said. The retention wall breached early Monday, sending the sludge downhill and damaging 15 homes. All the residents were evacuated, and three homes were deemed uninhabitable, a TVA spokesman told CNN.

The plant sits on a tributary of the Tennessee River called the Clinch River.
[...]
TVA spokesman Gil Francis told CNN that up to 400 acres of land had been coated by the sludge, a bigger area than the 1989 Exxon Valdez oil spill.

It's interesting to note the disparity over just how serious this is depending on who's doing the talking.

Some of the goop spilled into the tributary, but preliminary water quality tests show that the drinking water at a nearby treatment plant meets standards.

"I don't want to drink it. It doesn't look healthy to me," Jody Miles, who fishes in the Clinch River, told CNN affiliate WBIR. "Do you reckon they can bring all this life back that's going to die from all this mess?"

Still, there is the potential for more sludge to enter the water supply through waste runoff. "We're taking steps to stabilize runoff from this incident," Francis said. Although video from the scene shows dead fish on the banks of the tributary, he said that "in terms of toxicity, until an analysis comes in, you can't call it toxic."

One environmental attorney called that statement "irresponsible." The ash that gives sludge its thick, pudding-like consistency in this case is known as fly ash, which results from the combustion of coal. Fly ash contains concentrated amounts of mercury, arsenic and benzine, said Chandra Taylor, staff attorney for the Southern Environmental Law Center.

Uh huh. You can't call it toxic 'until an analysis comes in.' 'Preliminary' tests show the water meets standards. Well I would guess that, 'in terms of toxicity,' you can't call it safe either. A good secondary test might be to offer a couple of glasses to Mr. Francis and see if he's willing to drink it himself.

And before I leave this topic, I'd just like to say that this is once again NOT something that the cons can come back on with their old "who could have foreseen?" meme. Not only was this predictable, but it's happened before.

The most recent sludge dam breach was in Martin County, Kentucky, in 2000, which the EPA called the worst environmental disaster in the history of the Southeast. When the sludge dam breached, more than 300 million gallons of toxic sludge (about 30 times the amount of oil released in the Exxon Valdez oil spill) poured into tributaries of the Big Sandy River, killing virtually all aquatic life for 70 miles downstream of the spill.
[...]
At present, there are 45 impoundments in West Virginia alone that are considered at high risk for failure, and 32 are at moderate risk. In addition, most local communities are dependent on groundwater, which could be fouled by mining waste.

In other news: Did you see all the coverage of the aftermath in Bethesda Maryland of a burst water main - that led to dramatic helicopter rescues of several people from their cars when the road they were on suddenly turned into a raging river? Of course you did. The thing of it is, most of the news outlets reported the story much like someone who slows down to gawk at the carnage in the aftermath of a multi-vehicle pileup.

Shame on them. But that's the the standard we've come to expect from the Lamestream Media. Their reportage is generally shallow and vapid, and doubly so when to dig deeper would involve criticism of their corporate masters, or an examination of the failings of conservative thinking.

Not so with Rachel Maddow's report. Rachel quite properly takes a wider view of this incident. First she ties it in with the toxic sludge story, then branches out to include a steam pipe bursting in NYC and the collapse in Minneapolis of an interstate bridge across the Mississipi. The failure of the levees that resulted in Katrina going from disaster to calamity is also cited as attributable to one common theme: ignoring the creation and maintenance of INFRASTRUCTURE.

(Segment from Rachel's show, Dec. 23, 2008)
Rachel thinks infrastructure is a sexy issue. I don't know if I'd go that far, but it is certainly a vital issue.

Our country had a lot of infrastructure investment in the 1930s and in the 1950s, and we were due for an infrastructure upgrade in about 1980 and that's when a widely beloved president proposed turning back most of the federal aid highway program and all transit programs to the states.

(Clip of Saint Ronnie the Bad Actor):
"In this present crisis government is not the solution to our problem. Government IS the problem."

That was the philosophy, "no infrastructure spending for you.

So Rachel places the blame for these disasters where it belongs - with the small government philosophy of conservative Republicans. They love to privatize things, reduce taxes, and shrink government, in the infamous words of Grover Norquist, "to get it down to the size where we can drown it in the bathtub." Leaving the people of Bethesda Maryland drowning on River Street, the people of Kingston Tennessee drowning in a sea of toxic sludge, and the people of New Orleans without homes for the foreseeable future, many of them forever. Heckuva job, Saint Ronnie and your successors.

Other policies that conservatives like and have pushed especially hard for during the Bush crime spree of the last eight years magnify the misery resulting from leaving everything up to the corporate sector. The obvious one is deregulation, and let's examine how that ties in with privatization when conservatives try to push their philosophies. The less obvious is the push for tort reform.

Deregulation and privatization were just made for each other. Here's how the cons-ervatives want it to work. "We'll turn over responsibility for some given function to private enterprise while simultaneously relaxing (or even eliminating) the performance standards expected. The result should be the appearance of greater efficiency. Proving that we were right all along."

The problem is that the privateers don't do the same job that the government once did, because they are neither required nor expected to. Look at the great job KBR did with such things as wiring barracks buildings and providing drinking water to troops in Iraq. All because no standards were being enforced, and KBR took the most profitable and least ethical approach to the problem. I won't even go into how many construction projects were contracted for in Iraq but never completed, or the billions that just went missing without ever even being attached to any contracts at all.

Tort reform under Bush has, according to Wikipedia, focused on "limiting the number of claims, and capping the awards of damages." That is to say limiting claims against corporations, and capping the damages paid out, thus reducing costs and increasing profits. If a corporation goes up against an individual in court they will still have the full force of the law on their side.

Over time the words Tax and Spend have become a mantra of all that is wrong with liberal thinking in the conservative lexicon. But they have proven that if you don't tax, but spend anyway (as they ALWAYS do - big deficits were run under Reagan, Bush Senior and HUGE deficits by Bush the Lesser) you will run the government into massive debt, and the interest payments will baloon into a major budget item.

They've also proven that whatever spending they do is always tainted with corruption, like the bridge to nowhere that Ted Stevens and Sarah Palin both pushed so hard for. Thank Gawd that they were unsuccessful in that effort, but sadly most such pork-barrel projects go through, cost a lot of money and do no discernable good. 'Cause the Republican Santa is no better and possibly worse than the Republican Jesus.

Let's hope that the adults will be in charge in the new year, and that they will do a better job. At least they aren't held back from doing the right thing by a history of entrenched ideology. An ideology that has clearly become utterly discredited by reality. But then reality testing has never been a conservative strong point.