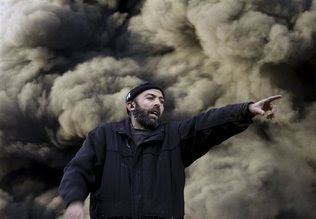 "This will not be easy and it will not be short," Israeli Defense Minister Ehud Barak said on national television about two hours after ground troops moved in.

Of course it won't. Because the current war hawks in the Israeli government don't want it to be easy or short.

"We have many, many targets," Israeli army spokeswoman Maj. Avital Leibovich told CNN. "To my estimation, it will be a lengthy operation."

Israeli leaders said the operation, meant to quell militant rocket and mortar fire on southern Israel, would not end quickly, but that the objective was not to reoccupy Gaza or topple Hamas. The depth and intensity will also depend on parallel diplomatic efforts that so far have been unacceptable to Israel, the officials said. [emphasis added]

This is the Bush Regime's "my way or the highway" diplomacy. Do what we say, or no deal.

Before the ground invasion, defense officials said about 10,000 Israeli soldiers had massed along the border in recent days.

Israel initially held off on a ground offensive, apparently in part because of concern about casualties among Israeli troops and because of fears of getting bogged down in Gaza.

Israeli Prime Minister Ehud Olmert said his government decided to mount a land operation despite the risk it posed to thousands of soldiers.

An inner Cabinet of top ministers met with leading security officials for four hours Saturday before deciding to authorize the ground invasion.

Olmert told the meeting that Israel's objective was to bring quiet to southern Israel but "we don't want to topple Hamas," a government official quoted the prime minister as saying. The official spoke on condition of anonymity because he was not supposed to share the information.

The immediate aim of the ground operations was to take control of sites militants use as rocket-launching pads, the military said. It said large numbers of troops were taking part but did not give specifics.

Israeli airstrikes intensified just as the ground operation was getting under way, and 28 Palestinians were killed. Palestinian health officials said civilians were among the dead, including a woman, her son and her father who died after a shell hit their house.

One raid hit a mosque in the northern Gaza town of Beit Lahiya, killing 13 people and wounding 33, according to a Palestinian health official. One of the wounded worshippers, Salah Mustafa, told Al-Jazeera TV from a hospital that the mosque was packed.

"It was unbelievably awful," he said, struggling to catch his breath.

The whole thing is unbelievably awful. Don't get me wrong, any jerk firing a rocket at anybody is an assclown. But organized mass deaths as a response is morally unacceptable to me.

UPDATE: It appears the Israelis are using cluster bombs. In this dense, dense little tiny strip of land. FDL has this: Gaza Update - Nowhere to Hide:

Laura Doty over at Oxdown asks Are Cluster Bombs Falling on Gaza Today? and quotes Sameh Habeeb of Gaza

Today. In reviewing the footage starting to come out (CNN's shows the same but is not yet online in embed format, this is from Italian tv, the same is seen in a Ha'retz tv video), we do see explosions in the air with multiple projectiles - you can see this in the video at right. I asked markfromireland, who is quite familiar with such weapons, if these are cluster bombs and he replied:

"Hard to tell exactly what shell they're using but yes thats what they look like. If you're asking is that what a cluster looks like then the answer is yes."

Each report we see and hear repeats, as I just did, the words “densely populated” and that repetition too easily jades us to the meaning behind those words. Gaza is packed with people – the majority under the age of 17.

To get a better sense of that density, look at this map

What's just making me insane is that there is a cure available; withdraw support from Israel. I mean that US policy should say "Israel, these mass killings and invasions aren't going to do you any good. So guess what? Our $6 Billion per year support is going bye-bye. There's nothing you can do to get it back. "

There's a couple other things we should do in terms of moderating US policy in the Middle East if you ask me, which nobody will.

After telling Israel nuh-uh, we should just say to Afghanistan "Provide Bin Laden's body for irrefutable proof of death; we will withdraw immediately afterward. And should you choose to continue a democratic form of government, you will get $2 Billion per year of what we used to give the Israelis. For as many years as we occupied Afghanistan. Strings attached; you have to educate women, and they must be equal in your law and society. That's it. If you don't want to do that, no problem, we just won't give you any monetary support. Your choice."

We then fund an immediate program of green tech science with another of the $2 billion to replace oil. We make sure the Saudis know. In fact, we should hire their American PR firm, Qorvis Communications LLC, as they could use a little rehabilitation, eh?

The other $2 billion should come home and take care of our own homeless. And our own hungry people. All this goes without saying that we should have been out of Iraq yesterday (or 2003 if you lke) as far as I am concerened.

Can you imagine that situation happening? All of the sudden, the US wouldn't be fueling oxygen to the fire of Muslim resentment. We would actually be working on our own security issues by helping real people. And it would all be a hell of a lot less expensive. Including the moral costs.

Nobody's going to let the Holocaust happen to Israel again. But will we let it happen to Palestinians in Gaza?

Yep - just a Dirty Fucking Hippy, but all I am saying, is: