...Worse Than You Could Have Imagined
Was anybody wondering how the DJIA miraculously rose by nearly 900 points yesterday on the news of the lowest consumer confidence results since that benchmark has been measured? It just doesn't make any sense unless there's some serious market manipulation going on. I asked myself what was happening and ran into something called the PPT, an entity whose very existence confirms some of my worst fears about how the world works. 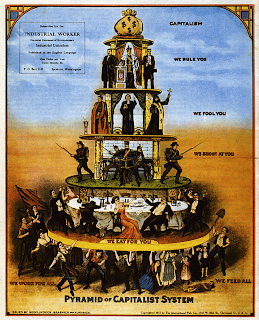 Have you ever heard of the Plunge Protection Team? That's OK, until today neither had I. Officially it's called the Working Group on Financial Markets, and is a mechanism for manipulating the markets that is shockingly apposite to anything resembling free market principles - all the more so because it was set up under the Reagan administration. Wikipedia tells you what it is:

The Group was established explicitly in response to events in the financial markets surrounding October 19, 1987 ("Black Monday") to give recommendations for legislative and private sector solutions for "enhancing the integrity, efficiency, orderliness, and competitiveness of [United States] financial markets and maintaining investor confidence".[1]

As established by Executive Order 12631, the Working Group consists of:


The current holders of the listed offices are respectively Henry Paulson, Ben Bernanke, Chris Cox and Walter Lukken. I'm sure you've heard about the first three. I have a theory about why you haven't heard of Lukken, the CFTC's acting chairman, which I'll tell you later.

Wiki's explanation of what the Working Group is is straightforward and uncontroversial. What it does is another thing entirely. Indeed the reasoning behind the PPT epithet brings out conspiracy theory accusations:

"Plunge Protection Team" was originally the headline for an article in The Washington Post on February 23, 1997, and has since become a colloquial term used by some mainstream publications to refer to the Working Group. Initially, the term was used to express the opinion that the Working Group was being used to prop up the markets during downturns. Financial writers for British newspapers The Observer and The Daily Telegraph, along with U.S. Congressman Ron Paul and writers Kevin Phillips (who claims “no personal firsthand knowledge” and is “not interested in becoming a conspiracy investigator”) and John Crudele, have charged the Working Group with going beyond their legal mandate. Claims about the Working Group generally include that it is an orchestrated mechanism that attempts to manipulate U.S. stock markets in the event of a market crash by using government funds to buy stocks, or other instruments such as stock index futures—acts which are forbidden by law. However, these articles usually refer to the Working Group using moral suasion to attempt to convince banks to buy stock index futures.

Let's first address this idea that the characterization of the PPT as market manipulators using tax dollars is a conspiracy theory. The pertinent question to ask is "if the group cannot buy or sell stocks, how can it intervene to prop up the market?" And unless you can come up with a believable answer to that, the whole conspiracy theory idea evaporates. Which, by the way, puts you by the fire in the conspiracy camp. And me, I'm not buying the moral suasion argument, so pass the coffee please.

Anyway, the recent $700 BILLION government intervention in the banks renders the question moot. Having a direct interest in the banks through the TARP program, the government can directly intervene in the markets through something rather less moral than mere suasion. And all apparently with nothing approaching meaningful oversight.

Unlike Wikipedia, this extremely persuasive article from WebofDebt.com makes no bones about what is really going on in the markets. Note that it was published last Saturday, before the inexplicable Dow Jones Miracle occurred. The author, Ellen Brown, was responding to the fact that Wall Street somehow managed to weather the storm relatively speaking on Friday after "Japan’s Nikkei stock average fell nearly 10% during the [previous] night, Hong Kong’s Hang Seng fell 8%, and Germany’s and Britain’s fell 5%".

THE NOT-SO-INVISIBLE HAND:
HOW THE PLUNGE PROTECTION TEAM
KILLED THE FREE MARKET
Traders prepared for the worst, but remarkably, disaster was averted. The U.S. market fell only 3.5%, just another “ordinary” bearish day.

Why the more modest drop in the U.S., where the financial debacle originated and should have hit hardest? Suspicious observers saw the covert hand of the Plunge Protection Team (PPT), the group set up under President Reagan to maintain market “stability” by manipulating markets behind the scenes. Bill Murphy commented in LeMetropoleCafe.com:

“Today the Muppets on CNBC were remarking how well our market acted, not falling apart as expected. All day long they spoke of how our market was acting differently today than every other stock market in the world. Well hello, the other countries don’t have a PPT, which is WHY our market is so different.

“There are those who might think what the PPT is doing is right. What they don’t realize is their making ‘Everything is fine’ for so long, and not allowing the market to trade freely . . . like allowing the stock market to fall the way it should, has kept the individual in the market . . . when they might have been SCARED out some time ago.”

In response to Bill Saporito’s comment in Time it might be countered that Henry Paulson’s Plunge Protection Team is quite adept at rigging an economy. The difference between an acknowledged socialist state and the stealth socialism we have in the U.S. today is that in a socialist state, everyone expects the market to be rigged and operates accordingly. In a rigged pseudo-capitalist economy, investors are easily separated from their money because they expect the market to follow “free market principles” based on “supply and demand.” They are seduced into “pump and dump” schemes – artificial manipulations that allow insiders to unload stock at a high price or buy it at a low price – because they trust in Adam Smith’s “invisible hand,” which is supposed to automatically set things right in a market left to its own devices. The market today is indeed controlled by an invisible hand, but it is not necessarily serving the interests of small investors.

To quote more of this article might go beyond fair use, and I would anyway be tempted to quote the entire thing, so instead I will urge everyone to read the whole thing, maybe twice or more, because it does get pretty technical. Most important is that you understand what a 'pump and dump' scheme is, and that it always favors the big player and milks everyone else. The idea that the government is using your tax dollars to help transfer wealth out of small player's (such as retirement investment accounts) hands into the pockets of the already obscenely rich should eventually sink in.

As Ms. Brown lays it out, it's a case of "Plunge Protection for Some, Plunge Creation for Others." Her home-page (promoting her book Web of Debt) contains some excerpts from the book, which must have been published about a year ago - there are reviews from November of 2007. There is little doubt that she saw then what is happening now. And it don't look good.

To keep up appearances, the "Plunge Protection Team" has been authorized by presidential order to use U.S. taxpayer money to manipulate markets to make them appear healthier than they are, and lately it has been working overtime. But official assurances of a "soft landing" are mere window dressing, aimed at preventing another worldwide depression as home buyers and stock market investors stampede for the exits.

It's particularly galling that this brand of corporate welfare is going on while the McCain campaign rails on about Barack Obama's socialism. Apparently it's not the idea of the government redistributing wealth that bothers them, just the fact that it's going to someone who actually needs it. Anyway, it's all business as usual under the crony capitalist operating principles of the Republican Corporate Feudal State. Socializing the losses while privatizing the profits.

This whole story should give you the right to call BULL-SHIT!! to any Republican who ever opens their pie-hole and lets the words 'free market' emit from it, in perpetuity. It's worth a read if for no other reason than that.
~~~~~~~~~~~~
Oh, and I said I'd tell you why you've never heard of Walter Lukken, didn't I? It's simple. He's the head of the CFTC, whose mandate under the Commodity Exchange Act is to prohibit fraudulent conduct in the trading of futures contracts. A regulatory agency. If you had heard of Walter Lukken it would have meant that he was doing his job. Which might have meant that this economic meltdown would never have occurred. Like the OSM that purportedly regulates the mining industry, or the EPA that supposedly protects the environment, the CFTC has been reduced to an office with one guy doing crossword puzzles and playing paddle-ball all day - regulators are the Maytag repairmen of the Bush administration. Business. As. Frickin'. Usual.
~~~~~~~~~~~~~~~
Addendum: There's a great related story from Wonkette about how Cindy Jacobs, a Christian dingbat associated with Pat Robertson's 700 club, declared a "Day of Prayer for the World’s Economies on Wednesday, October 29, 2008" “We are going to intercede at the site of the statue of the bull on Wall Street to ask God to begin a shift from the bull and bear markets to what we feel will be the 'Lion’s Market,' or God’s control over the 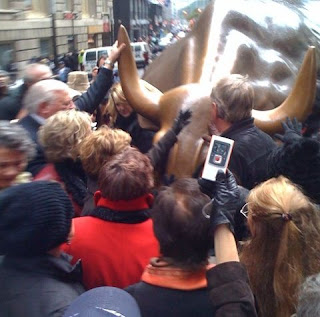 “While we do not have the full revelation of all this will entail, we do know that without intercession, economies will crumble.”

Because the stock market crash was caused by the sinfulness of allowing gays to marry, doncha' know?

“This is so severe in the economic area because we are facing judgment from the actions, not only for our stance towards Israel, but our blatant sin against Him in passing laws such as the one allowing homosexual marriages,” Cindy said.

Gawd, it'll be good to see the likes of those relegated to their backwaters again when the neocon/greedhead/Christofascist coalition is finally scattered to the four winds.

UPDATE: There's video of Cindy and her followers serenading the bull to the tune of God Bless America. hat-tips go to Slog the Stranger and TC.
Featured in