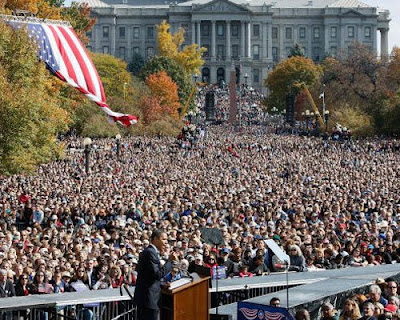 Apparently in estimating the size of the crowd in Civic Center Park in Denver today, the Denver police missed three people: Myself, UC and UC's partner. Here's what 100,003 people look like in Denver's City Center Park.

If you squint really hard underneath the American flag back in the trees, you'll see the three of us the Denver PD missed. I'm the guy next to the pink pixel representing a pink hat worn by a lady standing next to me. For scale, since this was apparently taken using a telephoto lens, it's about a half-mile from the podium to the capital steps. The police are actually estimating more than 100,000 so it looks like we beat St. Louis for the biggest Obama rally in the nation.

Not bad for a state that eight years ago was considered reliably red. 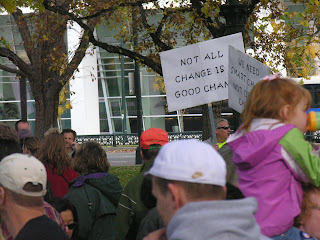 Of course, there were a couple of McCain protesters. We saw these guys trying to look inconspicuous. Of course, our crowd wasn't their crowd - they had nothing to worry about but I'm sure they projected their biographies onto us and thought they were faced with a hundred thousand clones of themselves. I'd have been quiet, too. Not shown is the nun with a placard calling Obama a baby killer. Gotta love that one - when contraception and comprehensive sex education would eliminate most abortions, they can only think the best course the one most discredited: Ban abortions. 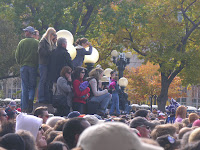 A bit more crowd-watching. They were hanging from lamp posts. They were in the trees. They were atop the Denver Post building and the Denver Art Museum. The crowd was huge, polite, and 80% of them had early voted. And finally, we found two of the undercounts: 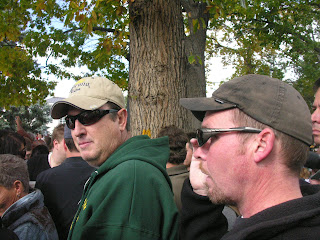 Not to be premature but it looks like next Tuesday evening will be a very short one for John McCain.

TAGS: 100,000 in Denver, Obama Rally, Undercounts, Don't Tell Anyone our Weather's This Good