Laura Ingraham was a guest recently on 'The View.' I don't watch it because I envision a few things that might happen: a) I would be stalking that stupid Hasselbeck chick to find the best time to kidnap her for reprogramming; b) I'd spend a fortune in writing Barbara WaWa daily to tell her to STFU! Oh yeah, then, there's that dummy who didn't know the earth wasn't flat. I'm digressing.......dammit.

Nope - that's not it accordingly to Ingraham. 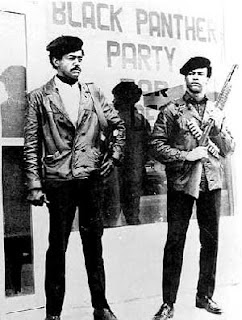 Ingraham says she "stole it back....returning power to the people of this country, not just an elite few, protesters, and the Black Panthers . . . . . a lot of people in this country feel disenfranchised - the heartland of America feels disenfranchised.' Her logic just seems fucking idiotic.

The heartland of America feels disenfranchised?

Disenfranchised means being deprived of the rights of citizenship, specifically the right to vote - as Whoopi points outs, it was black folks seeking and registering to vote. The Laura Ingrahams, the Wordsmiths of this world aren't disenfranchised. We're white, although as women it did take a tad longer, I will give it that. We, however, are NOT disenfranchised.

Therein lies the bullshit of coopting words and phrases that flows right into that Orwellian ditch. Ingraham appears to have it mean that the heartland voters (white voters) are being disenfranchised because their culture is losing to outside forces. Their votes don't mean anything any longer. Their folks aren't winning. Now if Ingraham means the ReThugs, the Theocrats, the Wussies who play dirty then cry foul when someone other than them does it and they get caught - yeah, absolutely more POWER TO THE DAMNED PEOPLE. They're not fucking disenfranchised! They are losing because people are sick of the autocratic, theocratic, lying bastards and their bullshit. Or maybe that's just me. Am I missing some valuable invisible point?

So, what I want is a discussion on how they (those fucking neocons and the like) coopt language to have it mean the direct opposite of what it has meant or have stolen phrases, etc., and attempted to make them their own as Laura Ingraham is attempting with her new book. Because this is pissing me OFF! Aren't there more words, more bullshit to throw in the ditch that these hucksters have been using? No more - I'm sick of it.

Email ThisBlogThis!Share to TwitterShare to FacebookShare to Pinterest
Labels: Politics