On Teabags and Bread 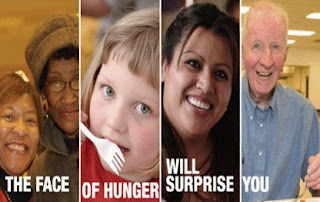 On July 4th, teabaggers will once again gather in crowds of ten and even twenty wearing their teabag hats and teabag earrings proclaiming their hatred for all things Obama. If it's anything like the April 15th events, it should be good for a laugh. But why stop there? I say we really piss 'em off and engage in a national act of socialism. And what would be more socialistic then sharing our food with those who have none?

The long summer months mean a drought at our nation's foodbanks and homeless shelters. It means children home from school may no longer have access to breakfast and lunch programs. National statistics about hunger in America are available only through 2007, but we need only look at the record unemployment rates and deduce that food will come in a long second to paying rent and utilities. And as this report notes,

In March 2009, SNAP/Food Stamp participation was 33,156,745 people, the highest participation level on record, and an increase of nearly 600,000 individuals from February 2009, the prior record level. Over the past twelve months, participation has grown by 5.2 million individuals.

I'd like to get a grassroots campaign going throughout the progressive blogosphere to counter the upcoming July 4th teabag protests with a food drive. And I know the Unrulies are just the ones who can make this happen. We have one month to make a plan and put it to action. I'm imagining folks across the blogosphere all giving locally, but let's use this thread to do some brainstorming. It's been my experience that two or more brains are way better than mine alone. Most important, I think, is we need a concerted effort to get the bigger blogs on board ala a blogswarm or like the blogs against theocracy campaign. Okay, maybe most important, is you telling me this is a good idea or a dumb idea. I'm willing to do the work on this, but I need your creativity, your ideas, your blog connections. Tell me what you think.