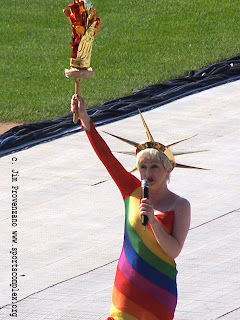 The Obama administration, in the persons of the DOJ's Tony West, James Gilligan and W. Scott Simpson gave eight legal reasons in the form of a Motion to Dismiss Smelt/Hammer v. United States of America why gay people are separate and unequal. A summary list of those reasons:


Reasons 1 and 2 are techno-legal, and can be dismissed as regards the separate and unequal discussion that follows. These same technical reasons could have been enough for the Obama DOJ to weigh in on the Constitutional basis that the President is required to do if s/he feels that the case at issue IS Constitutional. If the case is deemed un-constitutional, the President is free to not defend the damn law.

The Department of Justice may also notify Congress of a refusal to defend an impugned statute without appearing in court for either side. As recently as 2005, the Department of Justice notified congress that it would not defend a law prohibiting the display of marijuana policy reform ads in public transit systems. ACLU et al., v. Norman Y. Mineta (civil action no. 04-0262).

Since PresBO's DOJ wieghed in, points 1 & 2 alone would have sufficed if the Administration meant it's campaign claims, namely that DOMA was "abhorrent" and should be repealed, yet felt on technical bases that the case lacke merit or standing.

And yes, repeal means a legislative process. But the Administration has not sponsored or introduced their own legislation. But they did offer the remaining six reasons why I am separate and unequal along with other gay people. Frankly, this leads me to the belief that the campaign promise was empty, hollow, as actions are louder than words as we all know.

Let's have a look at the interesting points and most egregious claims in this Memorandum of Points and Authorities.

"I certainly agree (a) that Section 3 of DOMA is unconstitutional, at least as applied to couples like those who are currently challenging it in federal court here in Massachusetts.... I'm not at all reluctant to have it known that I think the equality component of the Fifth Amendment's Due Process Clause forbids the federal government to deny same-sex spouses benefits identical to those that it would grant to opposite-sex spouses when the spouses are "married" under the law of their state -- that is, when the spouses were married and reside in states where the law forbids a distinction between same-sex and opposite-sex marriage and rejects the DOMA definition of 'marriage.'"

Section 3 of the Defense of Marriage Act is Clearly Unconstitutional

Section 3 of the Defense of Marriage Act (DOMA) DOMA, 1 U.S.C. § 7 states, ““In determining the meaning of any Act of Congress, or of any ruling, regulation, or interpretation of the various administrative bureaus and agencies of the United States, the word „marriage‟ means only a legal union between one man and one woman as husband and wife, and the word „spouse‟ refers only to a person of the opposite sex who is a husband or a wife.”

The denial of these benefits to legally married couples has no rational basis. The denial of marriage-based benefits to same-sex couples has been found to violate constitutional equal protection guarantees by a number of State Supreme Courts. Kerrigan and Mock v. Connecticut Department of Public Health, 957 A.2d 407 (Conn.,2008.), In re Marriage Cases 43 Cal.4th 757 (2008), Goodridge v. Dept. of Public Health, 440 Mass. 309 (2003), Varnum v. Brien, WL 874044 (Iowa 2009). The challenge to DOMA 1 U.S.C. § 7 does not argue that same-sex marriage is guaranteed by the United States Constitution. It does not, in fact, address the question of same-sex marriage at all. Instead, DOMA 1 U.S.C. § 7 denies benefits to same-sex couples already legally married in their home state where the equality question has already been argued in front of the courts and settled.

The President reserves the right to refuse to defend an unconstitutional statute. Section 3 of the DOMA is clearly unconstitutional in that it denies married same-sex couples economic benefits granted to heterosexual married couples from the same state without providing a rational basis for this discrimination.

Yes, you'll notice that's the Gill case, not Smelt/Hammer. But it's the same difference in Presidential perogative as regards USA standing. Larry Tribe and the FlipFlop folks viewpoints are prior to the filing of this MPA (Memorandum of Points and Authorities) under discussion.

On to the egregious. Reason 5 (C) DOMA is Consistent with Equal Protection and Due Process Principles; DOMA Does Not Rest on Any Suspect Classification. The twisting of the Loving decision from the DOJ motion:

Loving v. Virginia is not to the contrary. There the Supreme Court rejected a contention that the assertedly "equal application" of a statute prohibiting interracial marriage immunized the statute from strict scrutiny. 388 U.S. 1, 8, 87 S.Ct. 1817, 18 L.Ed.2d 1010 (1967). The Court had little difficulty concluding that the statute, which applied only to "interracial marriages involving white persons," was "designed to maintain White Supremacy" and therefore unconstitutional. Id. at 11. No comparable purpose is present here, however, for DOMA does not seek in any way to advance the "supremacy" of men over women, or of women over men. Thus DOMA cannot be "traced to a . . . purpose" to discriminate against either men or women.

Speechless. The issue is about orientation, not gender, which is superfluous, as we're talking about SAME SEX COUPLES. But that's the rub with this argument; same sex oriented people clearly do not have the same rights as opposite-sex oriented people, hence the term "Unequal" in my post headline.

Since the claim by Hammer/Smelt brought up the Ninth Amendment, the same rude treatment was given by the Obama DOJ as they too brought up Griswold and twisted it just as they did Loving. Reason 6: DOMA Does Not Violate the Right to Privacy

Even if Baker were not dispositive in this regard, this Court should reject plaintiffs' right to privacy claim. The Supreme Court has described the contours of this right as follows:

The Constitution does not explicitly mention any right of privacy. In a line of decisions, however . . . the Court has recognized that a right of personal privacy, or a guarantee of certain areas or zones of privacy, does exist under the Constitution. . . These decisions make it clear that only personal rights that can be deemed "fundamental" or "implicit in the concept of ordered liberty," are included in this guarantee of personal privacy.

So you see, according to the Obama DOJ, rights of marriage equality for gays are neither fundamental, nor do they rise to the level of the "concept of ordered liberty." [And btw, just be on the alert about Griswold and the Ninth Amendment as regards women's reproductive rights with this Administration, as Griswold and the Ninth are part and parcel of Roe v. Wade.]

I'm not buying into what others around the blogosphere are saying about the incest and pederasty angles that are being read into this MPA, as I think that's overly reaching compared to the civil libertarian material I've pointed out so far, which I believe is enough to oppose the Administration.

Which brings me to the next part; how to oppose a popular President and not support the Right?

In this case, I propose that neither Obama, the DNC, DLC, Democrats of any stripe get one nickel until they do a 180 on this issue. Additionally, I think a tactic from the AIDS activists of the '80s is due for revival:

It's FUN! Stamp your cash in pink, red, hell just write on it in pen GAY MONEY and watch how the bills flood the circulation. Hell, just screwing around with money to send messages is kind of a neat way to protest at all.

But to end, that's the first peaceful method of protest I can think of at this moment as I am just simply mad at this turnabout from the campaign rhetoric. I'm sure to think of others, and I bet you will to.

Thank you for reading.

Out, Proud, and Not Asking For Rights - Simply Demanding and Living Them -
Kelly Canfield,
Denver Colorado