You Keep Using That Word...

mav·er·ick -- a lone dissenter, as an intellectual, an artist, or a politician, who takes an independent stand apart from his or her associates.

Tom Cruise in Top Gun was a maverick. 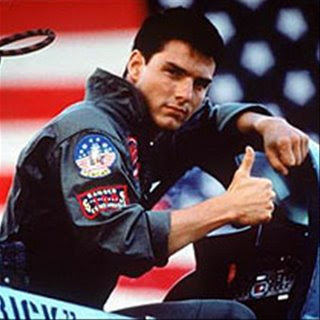 And as fantastic as that movie was, it was just a story. In truth, Cruise is a couch-hopping, alien worshiping nutter.

John McCain plays a maverick on the campaign trail. But in reality John McCain is a caddy. John McCain rides in George Bush's sidecar. When it comes to neocon warmongering, money laundering and influence peddling, Bush is the cheese and John McCain is the macaroni.

The character McCain is playing is based on a true story, unlike the maverickification of Sarah Palin, which was generated out of nothing. Indeed, there was a time, long ago, when John McCain fought the power. At the very beginning of his career he fought Reagan's foolish intervention in Lebanon and was vindicated when a truck bomber blew up the Marine barracks in Lebanon, killing 241.

McCain's main claim to Maverick-dom stems from his bi-partisan campaign finance work. This issue defines McCain's Senate career more than any other, because it allowed him to "atone" for the worst scar on his record--his participation in the Keating 5 scandal. And if McCain is to take the credit for being a maverick on campaign finance, doesn't he also take the hit for helping to completely screw that up? There's way more money in politics now than ever before. "Oops, I 'accidentally' helped the lobbyists." What a maverick.

McCain's long push for campaign finance went through a few unique phases. Under George H.W. Bush, McCain pushed hard for it against his own party, knowing that Bush would veto. When Bill Clinton courted McCain's support for nearly identical campaign finance reform, McCain and a few other Republican Senators threatened a filibuster.

This is the real McCain. The one who takes refuge within his party when it benefits him and he takes on his party when that benefits him. A classic example of this is when McCain prepared to jump ship to the democrats in 2001, which would give the Democrats control of the Senate, but McCain was beaten to the punch by Jim Jeffords. Without the political capital that comes as the reward for swinging the Senate, McCain decided he wouldn't gain enough by jumping, so he stayed where he was and waited.

After his 2000 primary battle with President Bush, McCain displayed a willingness to break with Bush on safe issues he could not win, like fighting the Bush tax cuts, while taking the lead pushing Bush's horrendous foreign policy.

McCain's pseudo-Mavericky ways ended in 2004 when John Kerry chose John Edwards to be his running mate, rather than McCain, who pushed for the spot. With no chance to take his revenge on Bush for the down and dirty 2000 primary battle, McCain set his sights on 2008. Knowing that Bush was poison, it had to be obvious to McCain that he would have to run against the Republican Party. So he forged an alliance with Joe Lieberman. They would be the perfect team for 2008. Two renegades fighting both political parties.

First, McCain would have to get by his primary opponents--a group of sycophantic company men (and Ron Paul) who all decided (except Ron Paul) that the only way to win the Republican Party nomination was to make it into a Bush hugging contest. And they were right. The shrinking base of the Republican party meant that the base controlled the nomination. So McCain got out there and out-Bush-hugged them all. McCain reversed himself on numerous issues in an effort to walk back all the damage his play at being a maverick caused within the base. The Bush tax cuts were suddenly a great idea. Torture was okay. The "agents of intolerance" were now his "spiritual advisers". Drilling became a good way to alleviate our energy problems.

Now, with the base passified and the nomination securely in his pocket, McCain is Mavericking up a storm. Except, that pesky base of his wouldn't let McCain follow through on his instincts and name Joe Lieberman his running mate. So he turned to his political Svengali--the guy trained and hand picked by former mortal enemy Karl Rove--and let him do it his way. The Rove-Bush way. They installed the embodiment of a political narrative into the Vice Presidential slot on McCain's ticket. They took a blank slate and created one myth for each of the constituencies to which they wanted to reach out. For the Pumas--she's a woman. For the base--she's a hard core holy roller. For the press--she's a maverick, baby!

That's not very maverick-like on John McCain's part though. That sounds downright cynical. And that is exactly why this off-camera accidental punditry by Peggy Noonan and Mike Murphy was so spot on. Noonan said, "I think they went for this -- excuse me-- political bullshit about narratives." Then Murphy said, "You know what's really the worst thing about it? The greatness of McCain is no cynicism, and this is cynical."

Well, Murphy is partially right. McCain is most effective politically when his ever-present cynicism is invisible, and this move left his cynicism plain to see, even to Mike Murphy. And even Mike Murphy knows that there's one thing that a Maverick is not and that is cynical and that is why McCain and Palin's house of cards is utterly, wait for it... 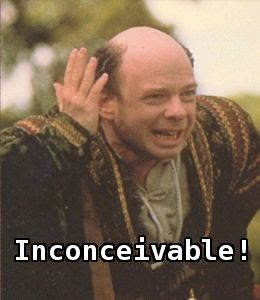 And it will fall apart.