The Biggest Story in Living Memory

"A Crime of the Highest Order" 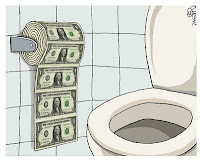 Glennzilla's post on the 'rescue' of AIG (and by extension Wall Street) is enough to curl your hair, straighten it out again, then make it fall out altogether. He's also posted what 'details' of the plan anyone is likely to see before it's implemented, and probably ratified without even a reading by the feckless Congress.

Here is the current draft for the latest plan. It's elegantly simple. The three key provisions:

(1) The Treasury Secretary is authorized to buy up to $700 billion of any mortgage-related assets (so he can just transfer that amount to any corporations in exchange for their worthless or severely crippled "assets") [Sec. 6];
(2) The ceiling on the national debt is raised to $11.3 trillion to accommodate this scheme [Sec. 10]; and
(3) best of all: "Decisions by the Secretary pursuant to the authority of this Act are non-reviewable and committed to agency discretion, and may not be reviewed by any court of law or any administrative agency." [Sec. 8].

Put another way, this authorizes Hank Paulson to transfer $700 billion of taxpayer money to private industry in his sole discretion, and nobody has the right or ability to review or challenge any decision he makes.

(and like the USA PATRIOT Act these 'emergency' measures seem suspiciously well developed, as if this plan had been sitting ready in a man-sized safe somewhere all along.)

It also bears comparison to the Military Commissions Act in its provisions for making secret decisions that fundamentally change the way society operates, then taking steps to put those decisions beyond any scrutiny. I say that's a bunch of bullshit.

Nor does this escape the sharp eyes of Mr. Greenwald. Some gleanings from the aforementioned post:

As Senator Christopher J. Dodd, Democrat of Connecticut and chairman of the Banking, Housing and Urban Affairs Committee, put it Friday morning on the ABC program "Good Morning America," the congressional leaders were told "that we’re literally maybe days away from a complete meltdown of our financial system, with all the implications here at home and globally."

At least they didn't recycle the 'smoking gun' or 'mushroom cloud' language, although 'complete meltdown' is a suitable substitute I suppose. Why am I calling this the Biggest Story in Living Memory? How could it be bigger for instance than 9/11, the invasion of Iraq, or the devastation of New Orleans when Katrina hit?

...whatever else is true, the events of the last week are the most momentous events of the Bush era in terms of defining what kind of country we are and how we function -- and before this week, the last eight years have been quite momentous, so that is saying a lot. Again, regardless of whether this nationalization/bailout scheme is "necessary" or makes utilitarian sense, it is a crime of the highest order -- not a "crime" in the legal sense but in a more meaningful sense.
[...]
..what's probably most amazing of all is the contrast between how gargantuan all of this is and the complete absence of debate or disagreement over what's taking place. It's not just that, as usual, Democrats and Republicans are embracing the same core premises ("this is regrettable but necessary"). It's that there's almost no real discussion of what happened, who is responsible, and what the consequences are.

Glenn laments at length the fact that no-one in the beltway elite, either on the political or the media side of the trough, is questioning this government bailout of America's wealthiest on the back of everyone else. But he makes it plain that that is exactly what is taking place.

We've retroactively created a win-only system where the wealthiest corporations and their shareholders are free to gamble for as long as they win and then force others who have no upside to pay for their losses.
[...]
More amazingly, they're free to walk away without having to disgorge their gains; at worst, they're just "forced" to walk away without any further stake in the gamble..
..This is "redistribution of wealth" and "government takeover of industry" on the grandest scale imaginable -- the buzzphrases that have been thrown around for decades to represent all that is evil and bad in the world. That's all this is; it's not an "investment" by the Government in any real sense but just a magical transfer of losses away from those who are responsible for these losses to those who aren't. 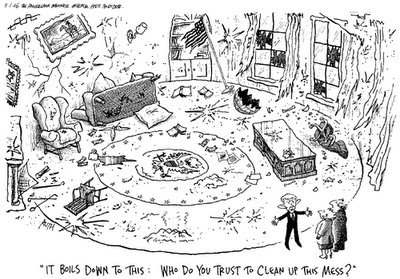 Greenwald makes plain not only who benefits from this corporate welfare - the very ones whose greed created the crisis - but to whom the burden is passed:

If there is any "pitchfork moment" -- an episode that understandably would send people into the streets in mass outrage -- it would be this..
..Whatever else is true, generations of Americans are almost certainly going to be severely burdened in untold ways by the events of the last week -- ones that have been carried out largely without any debate and mostly in secret.

Having already loosed numerous hollow-point rounds into the body of the American economy, the thief of the ages now delivers the coup de grace, point blank, right between the eyes. He knows he's going to have to get out of Dodge soon, and is making a final effort to cop as much swag as he possibly can.